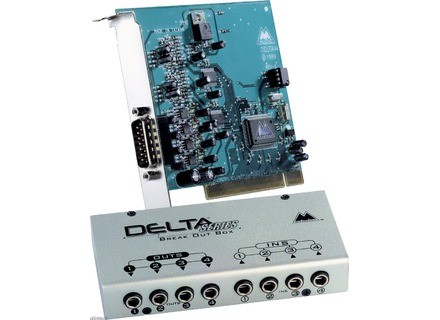 Delta 44, PCI/ISA + Rack Soundcard from M-Audio in the Delta series.

View other reviews for this product:
I bought it to save the BMD of my group (quartet rock guitar-keyboard-bass-drums), I pass normment time looking at the reviews on this full-MODELS types (semi-pro card or entry-level pro) and I ended up choosing it for the following reasons:

- MODEL PCI (I had a Tascam USB and stability in a silent nightmare on my config)
- External box (admittedly it is not long as it says in the notice but the fact Previous whether external fact that the card is not disturbed by noise the the indoor pc)
- 4 inputs / 4 outputs, it is not extraordinary but saves battery with the possibility to touch her a little later (2 entries took the console on which taient pr mixes overheads and 2 inputs for the snare and bass drum is a solution for poor but honest amliore your exact relation between o 2 card can not can send a stereo mix of the battery)

CHARACTERISTICS now this card can just Exceeds stepfather but for recordings of this type is more than enough. Nanmoins compares the tascam us 122 I had for some time, even when I regret the absence of some lments extremely practical: the headphone output and volume directly SETTING THE available on the case. the absence of Intgr preamp is also a cot it will prvoir

for voice and acoustic guitar:
Studio Project B1 -> TubePre -> between 1
(+ Preamp of the Ovation electroac -> art tube mp -> between 2 to double the take with two sounds without really DIFFERENT shuffled twice)

electric guitar:
Jazzmaster -> TubePre -> from 1 (prvoir an amp simulator, the preamp tube is good, but did not expect miracles)

No problem setup, ss march right away ... but on the machines with their rcentes Intgr lot of peripherals, I had to remove a number for an irq that is not shared with 3 other priph Americas (that is the usb2 or firewire are INTERESTED in addition to the ct nomad, the irq on the pc it has become modern ingrable on maps that do not allow a real manual config)
the manual is very well, no incompatibility on softs music but it's really not against an all-purpose card for multimedia: eg, the drivers are not recognized by the prog from my tv tuner so can not record sound, and there are lots of little quirks like a.
Having said that most are easily adjustable and the sound is so much better than a intgre you might want to use as a

Never had a crash li card. updates trs frquentes not for some time, but knowing that the card works well trs is not shocking
latency of 512 for recording and mix, no dcrochage except with a ton of effects that come eat CPU time. In 512, I play the synth connected in midi player soundfonts or dxi without feeling latency, same for the guitar and amp simulators
the number of tracks, recording the maximum of the map then 4. in playback, we had to go up twenty runs

I use it for several months and I do not regret this purchase is quite a card dpouille compared to other models of the same type but that is what many trs 'asked.
with exprience, I would do the same can be no choice because it is a map at end of life and for the price I put in nine the era I better now .
o nanmoins price it sells for now, see occasionally is a good deal of stuff and not taking srieux head that allows you to work in good conditions, you just see that unless you want to just connect a console or line-level genre instrumentals of synths, it will prvoir pramps of tinkering and a cable to get a headphone output.
See the source
Did you find this review helpful?yesno
Cookies help us improve performance, enhance user experience and deliver our services. By using our services, you agree to our use of cookies. Find out more.