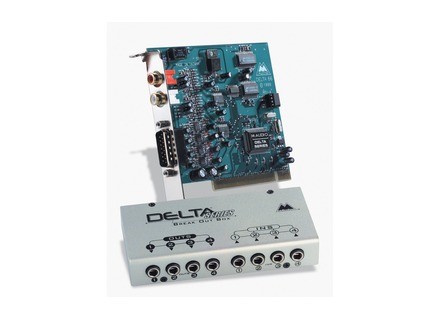 Delta 66, PCI/ISA + Rack Soundcard from M-Audio in the Delta series.

View other reviews for this product:
Card bought two months ago to save models with instruments like drums, guitar, bass and voice on a PC ddi computer music. Microphones drums / vocals, and bass are connected to a mixer which it is connected to the same between 1 and 2 of the M-Audio Delta 66, while the guitar is fitting e on the S / PDIF Delta 66 via a BOSS GT8 pdalier.

Yes, however unpleasant surprise to learn that ALL of these analog inputs / outputs are mono, unlike the notice which states connectors STEREO JACK 6.35, which is not true.

Prvoir therefore the use of cable (s) Y for a true sound Stereo (for example using the two outputs OUT1 and OUT2, which correspond to the left channel and right channel)

I do not know if the drivers are provided stable, since I use Linux Ubuntu Studio 8.04. In this regard, the card is IMMEDIATE detects and functional with Ubuntu. But be careful though using version 8.04 LTS of Ubuntu, I have not run the Russian in the APRS 4.9 moultes tests. Any Manir always privilgier LTS distributions (versions support stable long-term) to be the stability of sr System.

So I use the software Ardour / Hydrogen and others ... using the jack of Ubuntu, I have a latency of about 2ms with my configuration, which is great.

The reliability is excellent using Ubuntu, I never had any crashes until now and configure the card via the application intgre Envy24 is very simple.

The installation is hassle free and Droulez automatically via Ubuntu Studio. The configuration is very simple, it was quickly rev the card in hand.

I had no incompatibility (from version 9.4 to Ubuntu that I deprecated).

No need for manual to learn how to use it.

Overall I'm happy, the quality of the trs is satisfactory, the card is very practical with a small external box, the latency is non-existent Quazi Linux kernel via RT.

Even when I find a shame not to have placed the two S / PDIF in this case plutt derrire that the PCI card (not very practical for me to CASC).

But the point that bothers me most is the problem of analog inputs and outputs Mono is for me trs handicap, especially for outputs: It is for example not possible to directly connect a headset st ro it like I wanted to do (you do the sound in the left atrium). Obligation so to go through an amp / headphone amp (which in addition to the sound if it's collor to the monitoring), and use a cable in Y. .. cel is for that that I put 7 / 10

Now that I have the hardware Necessary for this card (mixer, headphone amp ...), and if I could not put more money in another sound card, I do it again even when this choice because I have not seen better for that price.
See the source
Did you find this review helpful?yesno
Cookies help us improve performance, enhance user experience and deliver our services. By using our services, you agree to our use of cookies. Find out more.