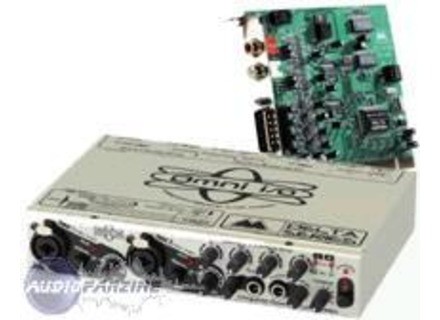 View other reviews for this product:
Bought this piece of equipment from Musician's Friend for $319. It came with the Delta66 audio card (PCI) and the Omni breakout box. I just needed an inexpensive way to turn my PC into a digital recording studio for home use.


The audio card installs just like any PCI card into your PC's motherboard. It was very easy. My PC detected the new hardware and I installed the drivers included with the card. The Omni breakout box connects to the audio card via a 15-pin DB cable. The breakout box is a "must have". Instead of fumbling around behind your pc to hook up and unhook instrument cables, you just plug your instruments into the breakout box. The DB cable included with the Omni Studio is 6 feet long, so it gives you enough length to set the breakout box in a convenient place. And the breakout box has all sorts of controls, input and outputs, so its very versatile. And the sound is great! Very, very low noise with this model and the digital reproduction of live sound is extremely accurate. It came with 2 manuals (one for the Delta66 audio card and one for the Omni breakout box) that were well written and relatively easy to understand (though this isn't a simple piece of equipment!). Another handy feature is that the 2 analog inputs are "Neutrix" jacks, meaning you can plug an XLR or 1/4" cable into them. Very handy!

This is an awesome unit for the money. I do with the DB cable was a little longer. The breakout box is rather smallish (2in high X 9in wide X 6in deep). There are so many knobs, inputs and outputs that everything is sort of crammed onto the unit. Some of the knobs are hard to turn because of their close proximity to other knobs. But everything is well labeled and, if you have some background with basic music gear, rather intuitive. But be sure to read the manual BEFORE you even hook it up! One other thing...you only have 4 inputs (2 Neutrix jacks and 2 1/4" jacks), so if you plan on recording more than 4 voices/instruments at once, you'll have to use an external mixer.

The Delta66 audio card seems well built, but all PCI cards look the same to me. The Omni breakout box is very well constructed. It has a heavy metal frame and the knobs and buttons feel like high-quality components. All in all, it seems very heavy duty.

I've had this unit for about 4 months now and I've been very impressed with the quality construction of the unit. But the true test of any equipment like this is the sound quality. Trust me, this unit sounds great. It's fairly easy to use (but you MUST read the manual!). I would highly recommend this unit to anyone interested in home recording.