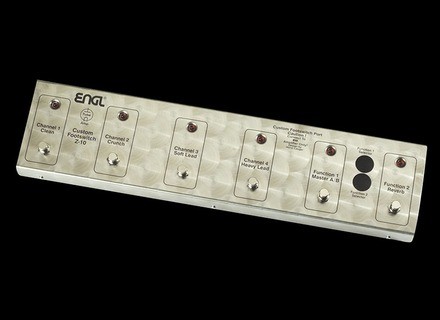 Z-10 Footswitch, Pedal/Controller from ENGL in the Z series.

View other reviews for this product:
The Z10 is pdalier Designed to drive the combo Sovereign 100, 120 and the heads Savage Savage Special Edition is - say that the amps possdent the "midi interface port." It controls, through its six switches, four channels of the head and two functions that you program the pdalier and corresponding functions of the head (change master volume, of prsence, triode / pentode, reverb 1 or 2, rough / smooth, speaker A / B). To program these functions, there is in the case of two pdalier slecteurs can choose which functions you want to enable for each switch, but attention should not only two functions are controllable on two switches at the same time, if a does not work at all. Two plastic cover for closing the holes that allow access these slectuers.

The chasis is trs robust, while mtal brushed the best effect. Above all, it is compact and lightweight. It works in power fantme because it must be plugged into the Midi Interface Port, by taking 25 Pin (like the one we used before to connect a printer on a tour of orninateur). A big 7 meters of cable is sold with the pdalier to be able to plug into the amp.

The only criticism I would have done in this regard pdalier swtches two caches function 1 / 2. Because you need to know what is going to want fontions drive through these two switches, because once the caches are mountains, there is no way to remove them. Sr Although it is still possible to accder slecteurs, but you disassemble the eye, which takes some time, if a certain ... temsp In fact, a problem is encountered especially when you have a Savage Special Edition Head, because it is the head with that one can choose between 7 diffrent functions (for The Sovereign 100 Combo, there are only two functions, Master A / B and Reverb A / B, so there is no choice), so we must Prior to this well rflchir we want to avoid having to do a power of bricollage which would be okay.

A by that, I think this pdalier gathers all the qualities of simplicity and robustness of efficiency, so that I would do all this choice if song.
I put 9 because of the hidden extras inconvgnent of plastic.
See the source
Did you find this review helpful?yesno
Cookies help us improve performance, enhance user experience and deliver our services. By using our services, you agree to our use of cookies. Find out more.