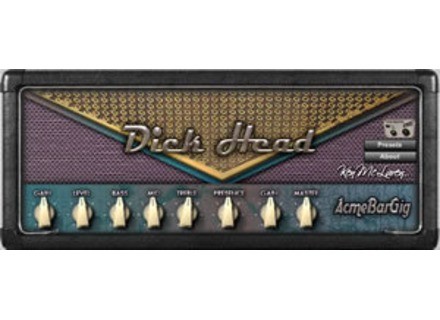 AcmeBarGig has announced "Preampus Week", a special week of plug-in releases offering one amp from its all-new line of Classic Hybrid amps every day until Monday.

The first two releases are already available: the Dick Head and the Meat Head. All plug-ins in this series are Heads ONLY so you will need to use some external cabinet modeling. They are free VST effect plug-ins for Windows.

AcmeBarGig says that Dick Head is at its best in the higher gain territory where it's "a powerhouse of ballsy high-gain tone". This amp is versatile, they say: "it'll take you on a tonal journey through crazy high gain territories and Texas Bluesville before you arrive at your Jazz City destination".

Meat Head is supposed to be in-keeping with the philosophy of AcmeBarGig's Classic Hybrid amps - inspired by the amplifier power-houses that defined the tones of Classic Rock and Heavy Metal from the '60s to now.

AcmeBarGig had this to say about Meat Head: "Meat Head harbours some awe-inspiring power, from that first crunchy Powerchord to searing leads drenched in sweet sustain. However, never does it lose the dynamic response and sweetness that seems to drip off every note. Roll the gain back for some fantastic overdriven British-style Blues and Classic Rock tones, roll your guitar volume back a little more and you're into that sweet, often-sought-after 'just breaking up' tube tone – all while retaining 100% of its distinct tonal characteristics."

Check out www.acmebargig.com for more info.