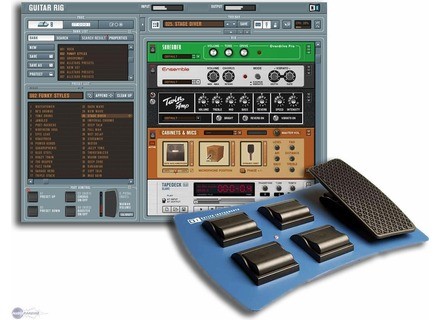 View other reviews for this product:
Native Instruments' Guitar Rig is the first version of the popular guitar modeling software. I've also used the newer versions of the software but first used this one a number of years ago now. I don't remember having any issues with installation, but that's about as much as I can remember from it now. Learning to use Guitar Rig isn't too hard, but it's definitely going to take a little bit of use and isn't the type of software where you'll immediately understand everything right off the bat. It's not too far off from this but I still remember needing a little bit of time to become fully comfortable with it. The presets are a good way to get started with it as it gives you some great sounds and starting points without having to have too much knowledge about it. The manual might be a good idea if you've just bought it and are looking to learn all the ins and outs of it, but I haven't seen it for myself.

When I was running Native Instruments Guitar Rig, I was doing so in Cubase SX and on a Hewlett Packard Pavilion dv8000 Notebook. The computer consisted of a 3.0 Ghz processor and 2 GB of RAM. Guitar Rig definitely takes up a good amount of processing power, especially on a system like the I one I was using it on. I am now running Guitar Rig 2 in Pro Tools on my Mac Book Pro and it runs a lot smoother than this version did on my old computer.

Native Instruments Guitar Rig was definitely a great first effort for this series of guitar modeling effects and processors. It's great in it's own right but the newer versions definitely sound better and run smoother in my opinion. If you can get a cheap version of the original Guitar Rig it might be worth it, but if that's not a factor you should definitely go with one of the newer versions. The effects in here are for the most part pretty realistic, but in general virtual guitar processing is only going to take you so far. If you rely totally on Guitar Rig for your sounds I think you'll suffer a little bit, but if you use it in tandem with real amps and effects, it's going to sound better of course. I didn't use this with the controller, but if you buy it new it will come with that. Guitar Rig in all of it's forms is software every DAW owner and guitar player should be at least aware of.
Did you find this review helpful?yesno
Cookies help us improve performance, enhance user experience and deliver our services. By using our services, you agree to our use of cookies. Find out more.