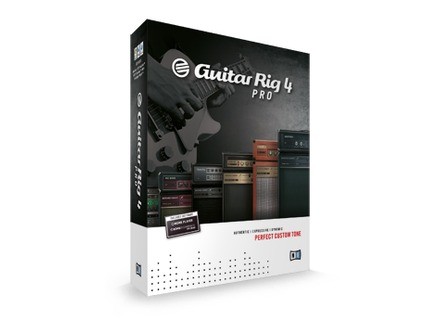 Native Instruments' virtual guitar and bass amp comes back for the fourth time with more amp simulations and effects than ever before and a very promising control room section... New functions in an overview.

The first Guitar Rig was introduced five years ago and immediately became famous among virtual amps thanks to its intuitive interface and its numerous, high-quality simulations. Each new version brought software improvements with it, including new functions and simulations, as well as hardware developments incorporating footboards and audio interfaces conceived for guitar players. So what's new in this fourth generation?

From the very first version, Guitar Rig distinguished itself from the rest by its nice and intuitive user interface – which isn't something you can say about other Native Instruments products. A very good point considering the number of functions it offers. The interface is divided into two areas: on the left, the browser allows you to load presets or to visit the virtual store, which offers a comprehensive list of add-ons – from amps to effects, tools and MDF (modifiers). You can actually create your own rig very easily by simply dragging the components from left to right. You can then modify the order of the modules in a few clicks. This is nothing new, but why fix anything if it ain't broke?

The presets and the search engine are what's new: Guitar Rig 4 Pro comes with over 250 presets, each of them including several tags like in Kontakt 4. This gives you the possibility to browse according to the guitar amp (for example, to find all presets based on the AC Box amp) or according to the music style (classic rock, metal, pop, blues, funk and soul, country, jazz, alternative rock, and rock 'n' surf). You can also browse presets according to songs with evocative names like "Kurt in Bloom", "Pete won't explain" or "Prince in the Rain". Finally, you can also search presets according to effect types: Special FX, animated, colored, distorted, drums, or reverbs and delays. Some of the effects are conceived for drums or keyboards, making Guitar Rig 4 interesting not only for guitar players.

Each preset has several tags, up to five stars and personal notes, so that you can find the preset you are looking for with the search engine; and you can create your own tags to classify them. For people who use Guitar Rig live, it is now possible to create set lists based on your own presets. Nice!

The icing on the cake is that you can find user presets at Native Instruments' website. The quality is questionable, but you'll certainly find useful sounds.

Now, let's take a look at the new amp models... 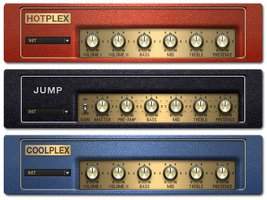 There are three new amp models that belong to the same family. In fact, they all look like Marshalls. The red model is called Hot Plex, the blue one Cool Blue and the dark gray one Jump. The red and blue amps are variations of the well-known Plex model – Guitar Rig's emulation of a Marshall Plexi. The Hot Plex has a higher gain headroom to produce a more powerful distortion. It is, so to speak, a modern Plex version. On the other hand, Native Instruments describes the Cool Plex as a more vintage Plex producing a cleaner sound. Everyone will find a suitable match among these three models, which have similar controls and looks. Some will argue that these amps are only variations of an already existing model instead of real new models... and they are right! The Cool Plex is not available yet but will be with version 4.0.8.

The third amp called Jump is a variation of the already existing Lead 800, which is a simulation – already present in the previous Guitar Rig versions – of the famous Marshall JCM 800. Native instruments describes it as less aggressive than the Lead 800, with less gain but a smoother response.

You might be disappointed by these "new" amps which are only variations of already existing models. But you have to keep in mind that Guitar Rig's amp library was already very comprehensive and now counts 15 models! You've got most of the legends but we miss more diversity considering that more than half of the amps are Marshall or Fender models...

And what about the effects?

Native instruments provides us with four new effects: two delays and two reverbs. They surely are a valuable add-on, considering that Guitar Rig 3 offered very few time-based effects (six) compared to other types of effects like distortion (11), modulation effects (11), and filters (10). The new delay effects are called Grain Delay and Twin Delay. The first one has ten editable parameters allowing you to create either subtle effects or very strange and complex ones. It was conceived for sound design addicts and it might not appeal to garage rock fans! The second delay is a much more classic effect combining two parallel delays to achieve a stereo sound. The settings are very simple: you have three editable parameters (time, feedback and level) for each delay line. Both effects are a good complement to the already existing delays and extend an already comprehensive offer. 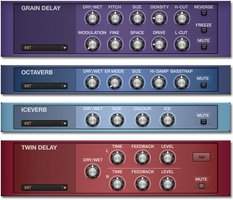 The new reverbs are called Iceverb and Octaverb. The first one is a very cold hall effect, like if you were inside an ice cellar or an igloo. Its editable parameters are quite simple but interesting: "Size" allows you to change the room size, while "Color" and "Ice" work as filters which can be used like a wah effect with an expression pedal. The Octaverb is a stereo reverb that allows you to select the early reflections of eight different rooms, change the room size and control the high and low frequency bands. Both reverbs ought to be very useful for guitar players but also for keyboard players and drummers. And they are more than welcome considering that the previous Guitar Rig version included only two reverbs: a vintage-type spring reverb and a studio reverb.

The upcoming 4.0.8 update will also include a major improvement regarding effects: a master FX section that will allow you to activate one or several modules regardless of the loaded preset. Guitarists who use Guitar Rig live will have the possibility to insert an EQ and/or a reverb at the end of the effect chain to match the acoustics of the venue and the response of the P.A. system. A simple but essential feature for live applications. You'll ask yourself how you managed without it... Bring on the update!

Guitar Rig 4 Pro also offers other improvements: Native Instruments states that time and pitch effects have been enhanced. There's also a new option called true stereo which allows you to process the left and right channels separately. This last feature can be very useful for stereo sources but your CPU will suffer twice as much!

However, the main attributes of this forth Guitar Rig generation are the speaker and microphone simulations. Ladies and gentlemen, let me introduce you to the "Control Room"!

In the previous Guitar Rig version, you could choose between two modules for speaker/mic simulations. "Cabinets & Mics" goes a step further and allows you to do almost anything that comes to your mind as far as speaker and mic selection and position is concerned. This module is quite comprehensive but requires you to have a minimum of guitar amp miking experience. Luckily, guitar players who don't care about miking can use the "Matched cabinet" module which automatically combines an adequate speaker cabinet with the selected amp model. The module has only two parameters, one to mix the signals of the two mics (mix) and another one to change the distance of the mics from the cabinet so you can control the amount of room sound in the signal (dry/air). Both options are ok but the sound of the emulations isn't always as good as you would expect... With the new "Control Room" module, Native Instruments introduces – for the first time – something strongly recalling convolution in Guitar Rig!

The purpose of this module is to give you a lot of possibilities without requiring any miking knowledge. In order to achieve that, a sound engineer placed six to eight mics in front of each of the five available speaker cabinets and ran the signal through some preamps and a mixing desk. You don't have the option to change the mics' position but you won't have any phase or position problems. You only have to mix the eight signal sources using the small mixer available in the Control Room module. Each mic has pan, mute and solo functions, while the whole mic set has a global "Air" parameter, as well as a 2-band EQ (low and high). Native Instruments doesn't give any info about the technical aspects of Control Room, but it certainly sounds different from Cabinet & Mic and seems to use convolution technology. The fact that this new module requires much more CPU power than its predecessor corroborates this idea.

These new speaker simulations are tempting, but how do they really sound?

We won't keep you waiting any longer: the new speaker simulations make Guitar Rig sound better than ever! Even though the amp and effect simulations are still the same, this new module completely transforms the sound of the software. The possibility to mix the different mics gives you huge possibilities and you can achieve quite contrasting results depending on the settings. Note that the Match Cabinet module also benefits from the new speaker simulations. Moreover, it offers a new version of each speaker cabinet as well as Guitar Rig 3 support so you can load your old presets. This makes it very easy to compare the sound of previous and new speaker simulations. Now, let's choose an amp and combine it with its matching speaker cabinet. And now let's switch between the new and the old simulation with the same settings: the sound difference is amazing! The new simulations sound much more authentic! After listening to the difference you'll probably ask yourself "How could I have used Guitar Rig 3?" Judge for yourself:

And now some very convincing sound samples of the new Jump and Hot Plex amps. Unfortunately, we couldn't try out the Cool Plex but we will as soon as the update is available. The new effects are also very satisfying – they enrich Guitar Rig's sound possibilities. But don't take our word for granted:

On the other hand, we are still waiting for version 4.0.8, which was scheduled for October... Besides the Cool Plex amp, it will include the Master FX section, an improved tuner and a noise gate.

At first sight, Guitar Rig 4 Pro seems to offer very few new features, but that's only on the outside... The Control Room module and the new speaker and mic simulations definitely improve the overall sound, expand the possibilities and justify the price of the update. The new amps complement the already comprehensive amp library and the new effects make up for the austerity of the previous effects library. The full version of Guitar Rig 4 Pro sells for $199 which isn't much for a very comprehensive and great-sounding software. Native Instruments has been washing away the imperfections of its guitar amp simulator to make it a top product in its segment.