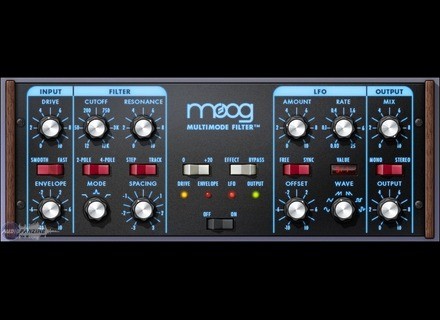 While there is a huge choice of filter effects available on the market today, it could be argued that many of them lack the character and warmth of some of their hardware counterparts and while some claim to capture the sound of vintage hardware, the reality is few have come close. It’s just possible that all this is about to change though, as one of Universal Audio’s latest offerings for the UAD platform is the Moog multimode filter. With a well respected pedigree in emulating prized vintage hardware, Universal Audio are perhaps the best people to attempt the recreation of the classic Moog sound.

Most of us are accustomed with multi mode filters and have used them in our productions at one time or another. Obviously some genres call for these tools more than others but its safe to say that many of us see them as an integral part of our production arsenal.

For those of you that aren’t so familiar with multimode filters, they are simply filters that allow various modes or models to be set by the user. For example a typical plug-in will present the choice of low pass, high pass and band pass filter models, as opposed to a hard wired low pass filter, seen in some filters and synthesizers.

Some filter plug-ins not only offer this multimode flexibility but additional features such as resonance, overdrive and modulation capabilities are not uncommon and offer the user the ability to create diverse effects.

Of course one issue some people will have with any Universal audio plug-in from the offset, is the fact that they only run on the UAD1 platform and lack any kind of native support. In the platforms defense, the UAD1 and newer UAD2 are now extremely popular amongst all levels of engineers and musicians alike and the entry level cards are extremely affordable making the plug-ins a realistic option for most budgets

As is the case with all of the UAD plug-ins, the Moog Multimode supports VST, Audio Units and RTAS formats, so most DAW users can join the party. Installation is a breeze as the plug-in will already have been installed with your UAD software. If you don’t see it in your plug-in list fly over to the Universal Audio site and grab the latest UAD driver release.

Once the appropriate UAD software is installed you can enjoy a nice feature supplied by the UAD folks and that’s the full 14 day demos that come as standard. Every plug-in you haven’t yet purchased is available to preview and this is a nice way to try the processors out in your projects before you lay down your hard earned cash.

Once installed and loaded the plug-in just screams authentic vintage Moog. The Multimode filter doesn’t intend to replicate any particular Moog instrument or product but its interface appears to borrow heavily from the Moog Voyager series and the more classic Mini-Moog mono-synth.

The entire interface including the knobs, switches, lights and graphics have all been carefully designed so that the user will feel as if they are using a piece of Moog hardware, or at least as close as is possible with a plug-in. Even Moog’s classic wooden side panels have been included here.

Unlike some filter plug-ins currently on the market, at first glance the interface looks refreshingly simple and sports an immediately identifiable signal path. As is the case with Moog’s instruments, the whole layout takes a no nonsense approach, with straight forward labeling and clearly defined areas for groups of controls.

The front panel is essentially divided into five separate sections:

Input section: In this first section Universal audio has included a drive circuit (promising accurate analog sound) and a mode switchable envelope follower. This can be set to smooth or fast mode and the sensitivity control can be used to apply both positive and negative effects.

Filter section: The heart of the plug-in is obviously the multimode filter and this section provides all the parameters needed to sculpt your sounds. Again things are kept simple and the filter relies on sound quality over gimmicks and huge lists of filter models. The six controls here allow you to adjust the frequency, resonance, pole mode, tracking, filter mode and stereo spacing. Although this may seem like a reasonably sparse collection of controls, even small adjustments here can drastically change your end result.

Master/Center section: The section in the centre of the plug-in allows you to change the output level of the plug-in, you are also able to bypass the effect and turn the filter on and off. This can be very useful if you plan to bounce the output of the filter, in this situation turning the plug-in off will save valuable UAD processing power. This section also features four virtual LEDs that provide visual feedback on the drive, envelope, LFO and output areas of the processor.

LFO: This is a fully featured host syncable LFO, hard wired to the cut off frequency of the filter section. You are able to choose from a variety of waveforms and it even includes an ‘offset‘ parameter that allows stereo effects to be dialed in.

Output: This final section simply allows the effected and dry mix to be balanced and the overall output level to be altered. The plug-in can also be switched from mono to stereo operation here.

Features such as a clearly laid out, intuitive interface and across the board compatibility are of course important, but the real deal breaker here is the sound the plug-in produces and in this area the Moog/UAudio hybrid’s performance is nothing short of fantastic.

When applying drive to a sound in the input section a warm, fat analog style sound is produced that I have not yet been able to create with a digital filter plug-in. Close your eyes and you could be convinced you are listening to real analog circuitry doing its thing. Drive this section hard and you’ll get some really pleasing harmonics that compliment pretty much any source material.

The filter is equally impressive and features the sort of smooth, balanced sound you would expect from Moog hardware. A sweep through the whole frequency range demonstrates the amount of work UA has put into making this sound perfect. There are no audible steps or artifacts at all, this is a real breath of fresh air. The filter is also capable of producing extremely authentic self oscillation effects, crank up the resonance and you’ll hear them for yourself but be careful with the volume as your tweeters could suffer here!

Another thing worth mentioning is the stereo effects that can be created using a mixture of the ‘Offset‘ LFO control and the ‘Spacing‘ parameter in the filter section. Of course the plug-in has to be in stereo mode for these to work, but even sounds with very little stereo image can be opened up dramatically using these controls.

Of course, all this analog mimicry does come at a cost. To reproduce this sort of sound accurately there is a lot of number crunching taking place so an instance of the Moog multimode does take a considerable slice of a UAD1’s processor to run. Of course if you own a UAD2 quad then you’ll not spend too much time worrying about this but if you own a single UAD1 card then it might be worth considering before you make the purchase.

However, UA has cleverly included a cut down, less CPU hungry version of the Moog filter as standard with any purchase of the plug-in. The ‘SE’ model sports a very similar interface, with an almost identical sound. The main thing that is sacrificed here is the drive circuit in the input stage. If you can live without this, and some of the programmed irregularities of the full fat version, then the SE version may prove to be very useful indeed.

This is hands down the best software filter I have ever come across. It sounds truly analog and it has an interface that even a beginner would find accessible. It is slightly CPU hungry but considering Universal Audio has recently released the all powerful UAD2 range of DSP cards and that a light SE version of the plug-in is bundled with the full version, this shouldn’t be too much of a problem for most users. If you are in the market for a filter plug-in and own one of the UAD DSP cards this is certainly a must have. It is so good it is even worth considering buying a card just to run it, as a hardware filter of this quality would cost an arm and a leg.