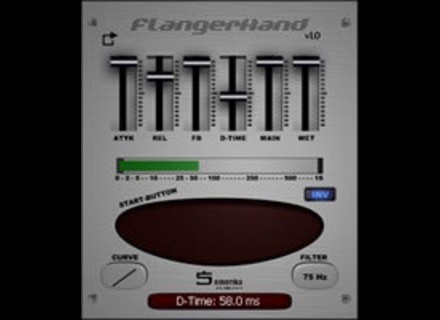 Semerika has announced the release of FlangerHand, a new free VST effect plug-in for Windows.

The FlangerHand plug-in is based on the idea of the early flanging effect realised on a setup of up to 4 tape machines (1 source, 3 recorders) in the '60s.

The playback-head output from two recorders was mixed together onto a third recorder. The "flange" effect originated when an engineer would literally put a finger on the flange, or rim of one of the tape reels so that the machine was slowed down, slipping out of sync by tiny degrees.

A listener would hear a "drainpipe" sweeping effect as shifting sum-and-difference harmonics were created. When the operator removed his finger the tape sped up again, making the effect sweep back in the other direction.