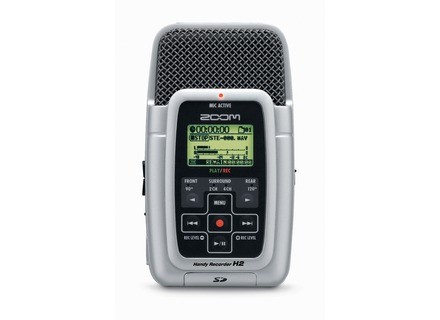 H2, Pocket Recorder/Multitrack from Zoom in the H2 series.

Product replaced by the Zoom H2n.

View other reviews for this product:
Used 5 days, retourn the merchant.

I tried a lot of multi:
- The best noise level remains low MAGICSTOMP yamaha but it is no longer manufactured or follow fairly complicated to use, and apparently remains fragile
- The practical use and especially the beefier is undoubtedly the line6 pod with optional crankset, but the sounds are boarf ultimately particulirement live, and "amp mulations "not great (they give, even fiddling death not really want to play is pretty simple as test).

The zoom is pretty beefy but has no guts, not the beginning of an ounce of grain beginning whatsoever for OD, effects, cuts, I do not even speak synths. The only somewhat usable stuff is reverbs and stock and lead, very loyal rights, but rather as the data sampling. It's a shame the format and construction are great, but it would need the MAGICSTOMP the inside and they would all good.

Buy them for lack of better obviously, but you really need to have great effects and not round.
See the source
Did you find this review helpful?yesno
Cookies help us improve performance, enhance user experience and deliver our services. By using our services, you agree to our use of cookies. Find out more.