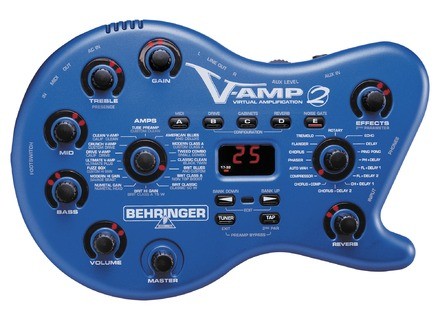 View other reviews for this product:
Bought at Texas Music Emporium (in texas) for $130.

All of its functions are performed well. It is extremely versatile and can run from the most warm and moody clean to the exteme in razor sharp heavy metal distortion (which is exactly what I bout it for). It also spits out a decent crunch for a dynamic blues sound. Then there are the effects which are not as dynamic as I would have hoped but are pointless to me since I dont use any anyway.

The intent for me was to replace my my array of 2 cheezy sounding distortion pedals, hardly a task for the v-amp 2; what I got was many very nice sounding versions of insane distortion, and in that arena the POD can't touch it. This thing can really play metal!

Most importantly you cant beat the price.

It does not accomplish the number one thing it claims to do: make accurate models of various amps and speaker cabinets. I can say that none of the amps that are on its list sound like the origian, or even close; and the speaker simulation leans the sound in the direction of the cabinet but the overall effect just waters down the sound, forcing me to turn it off and leaving me with an overly sharp tone.

However, this piercing tone can be equalized into a much smoother and extremely badass tone, especially if you are playing through big cabinets with thier own characteristic sound shape.

For example when recording with my computer or practicing with my 10 watt crate, I turn on the hi gain setting and use a 4 12 cab sim. When live I use 2 4-12 cabs and no speaker sim. Speaker sim on top of actual speakers sound very very bad. I would say for the ideal recording just mic your cabs.

Also the footswitch that comes with the unit is very slow to respond, and switching on the unit in general causes skitzofrenic
blasts of guitar nonsense untill the preset is loaded.

For whatever reason they shaped this thing like a telecaster-les paul mutant. I dont know why, its really silly. Plus dont drop it, its plastic and has some weight.

The interface is very simple and intuitive, i figued out 90% of the operation in the store without any instruction. You can dial in whatever you want in seconds. Plus all of the dials are analog with LEDs as pointers which makes for exelent on the fly tweaks, except for one dial, the master volume(good idea).

This is one sexy econo-unit. The cost to function ratio is much higher than anything else on the market. Most importantly it just sounds very nice, no matter what sound you are going for.