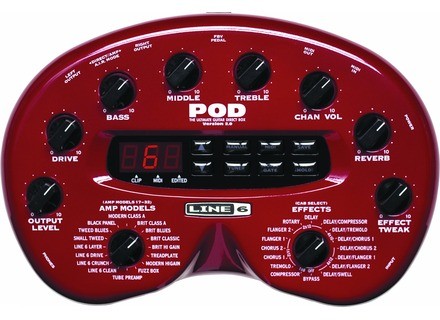 the +:
- Easy to use. it is not a gas factory! Most of the settings are accessible from the front via the pots.
- HP simulations that are profoundly changing the color of its
- Clean sounds simulations are not bad

The -:
- The price of floorboard pedals (over nine € 300 at the time, or a set to almost € 600)
- We quickly forget the factory presets are blah
- Simulations crunch and overdrive unrealistic
- Not transcribed game dynamics
- It "clip" with a Variax 600 (too much input gain)
- The relatively limited effects.

In summary: In 2001, vendors said it was what was best in the market for amp simulators, hence my choice.
I did not regret it because it allowed me to touch a lot of sounds. But but but I was aware that techno could do better and that I was missing something. So I sold.
I was even going to direct me to the analog pure when I came across a combo Fender Mustang II, and here I confess that I found what was missing in the POD 2: realism in overdrive and crunch sounds. When to clean (twin reverb), what a treat! In short, I quickly upgraded with a mustang floor pedal to make a little scene.
So if you find one of secondhand for a few tens of €, why not if you want to make models. But be aware that Fender is best to not very expensive in nine, that Line6 has undoubtedly improved the POD as well with HD500x putting probably (I have not tested -still-) to POD2 spanked by its versatility (full effect) but provided you do not drown in the settings.
See the source
Did you find this review helpful?yesno
Cookies help us improve performance, enhance user experience and deliver our services. By using our services, you agree to our use of cookies. Find out more.