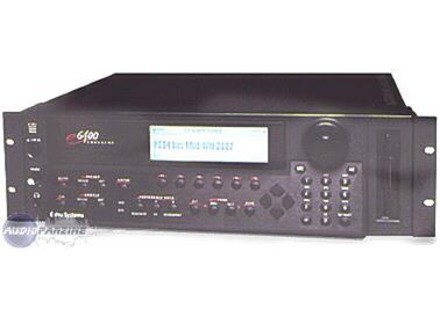 View other reviews for this product:
CF below! Note even if a number of options: flash ram (Sample prefers to store its programs and) separated out (in addition to the eight already instaler 8) for a total of 16 separate output, effects, nternal harddisk, ...

My first 'big' sampler so I have learned with the EOS and I must say this is by far the most convenient to use: everything is clear logic is unstoppable and almost unlimited possibilities. ..

The possibility of links with the outside are quasimment comprehensive (lack of usb or firewire ... but at the time was no more!

A note on my model, however, two defects: the EOS is SLOW! Sometimes it is exasperating to have to wait between changes in pages and menus but hey, once you know ... we sometimes have time to take a caf! Not without laughing couple in Soundforge SCSI we make the edition on the computer and the sampler is returned to the game and the sound processing!

The other defect is more serious and seems redundant on the range EMU in the late 90's: the wheel increment is very, very temperamental ... on mine was to do four years that I have to change the value using the apps buttons increment / decrement which is sometimes frustrating ... I have a Audity2000 has the same problem machines and other derivatives of E-XXXX series also experience the problem ... In addition, spare parts are rare to see ... not found so check if you buy occcase ...

A MONSTER! The lines have always your sampler Emu known for their unique sound: A serious HUGE, a very strong medium low a detailed mids ... only the high register is a little behind.

Or the Akai will sound very clean and a bit metallic, or Kurzweil will be very precise and ar Emu samplers are transparent, but may ultimately they make the grain is FATAL if you like music in charges the low end.

The overall color is not 'digital' and sounds very warm. on the other hand do not expect to be a bluff by listening ... it's the only sampler in the case of a mix that character will be revealed! Some styles of music have a sound image crs particularly through the machines (The Illbient note with an artist like Scorn that uses only as E-XXXX. For a grain ide Listen his albums' Gyral 'or' Logghy Baroghy ').

As for the synthesis capacities are tappe in high-end! Semi modular architecture brings the modulation matrix and countless filters allow delusions of all kinds ... Certainly if you are hip / hop or rock, or the variety will not give you much, but if you are in the experimental music you'll be able to give you a field day! I have in my machine can park sampler that allow treatment also pousss and my knowledge the only Kurzweil (but with a different sound!) And some software samplers (kontakt) could concurencer.

Synthlecteur use of single sample is not ridiculous at all against a machine ddies ... Moreover, the E-Synth is none other than the same engine with waveforms integr es (such as the range of Emu expanders also the MoPhatt at Virtuoso, through the Proteus ....).

11 Years I use my own and do not part with it for kidneys in the world! I do not never replace a plug in and if it falls in the harbor I buy a Live! I find it boyfriends games during those 11 years of loyal service (Kurzweil K2000, Akai S3200XL) but it is by far my favorite level and its ease of use!

If you want a sampler I can only advise you!

all nine because of the problem of reliability of the dial!
See the source
Did you find this review helpful?yesno
Cookies help us improve performance, enhance user experience and deliver our services. By using our services, you agree to our use of cookies. Find out more.