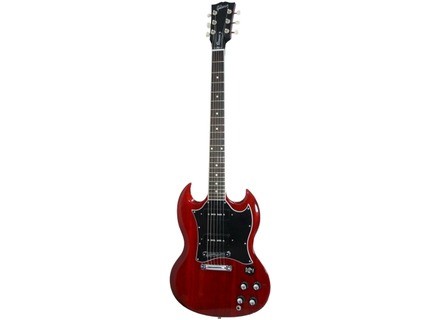 View other reviews for this product:
The Gibson SG guitar is a guitar that was taken from the Gibson Les Paul style feeling and tone but with a few added features that makes this guitar much more versatile than a Gibson Les Paul guitar. First it has a double cut away body shape which almost looks like devil horns but the bottom part allows you to reach the higher frets of the guitar much easier than you can with a Gibson Les Paul guitar. Second, the body of the guitar is much thinner than a Gibson Les Paul which gives a little bit thinner tone for more focused and cleaner voicing overall. You lose a little bit warmth and girth to the tone, but it blends very nicely with most musical situations.

This guitar features two P90 pickups two volume control knobs and two tone control knobs. You have a much longer scale neck and a Gibson Les Paul guitar so it's much easier to solo and play lead lines in the higher frets with this guitar. I really liked his guitar when using it in a recording studio because it has a good biting tone and the overall voicing his cuts through the sound a lot better than a Gibson Les Paul in my opinion. Gibson Les Paul is a great guitar and one of the most versitile guitars ever created but I find this takes what the Gibson Les Paul started and improves it.

This guitar has a warm mahogany body that gives it a nice thick tone when you use a lot of distortion or even mild overdrive. It has a very precise and cutting tone that allows you to play and cut through most bannd mixes. You won't have any problem hearing your guitar in a band mix with this instrument.

If you have a good high gain amplifier such as Marshall amplifier, a Bogner, or Mesa boogie then you can get some great thick saturated distortion tones with this guitar. Couple it with a good analog delay pedal or any other effects pedal and you'll have a very versatile guitar rig.

I recommend this guitar to anyone is looking for an alternative to Gibson Les Paul guitar. These guitars generally are a little cheaper than a Gibson Les Paul and in my opinion have a little bit edge over the overall versatility between the two guitars. I pretty much recommend this guitar to any guitar player who needs a solid recording instrument or a highly reputable gigging guitar. So if you're an active performer than this is a great guitar and certainly a players guitar.