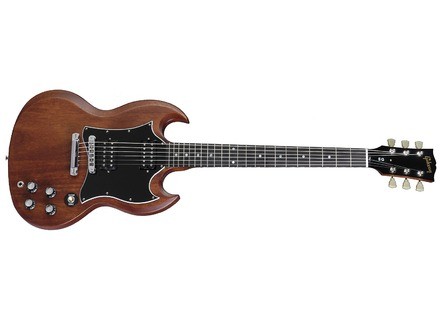 Value For Money : Excellent
View other reviews for this product:
ATTENTION, JUST NOTICE hilarious but NOT RELIABLE
Made in the USA of course.
This guitar rve possde 22 boxes and the key is rosewood.
the pickups are Gibson BB King signature as the standard, except that both are 490 (instead of only 490 and 498 on a standard, but in fact it's just a technical question of numbers turns).
the bridge is classic gibson (as in Standard or Les Paul) just so annoying when changing strings, but trs strong bill and easily adjustable.
there are 2 volume knobs and 2 knobs of Tone (1 for each pickup).
The handle is of type gibson is that large (like a guitar folk) but flat (compare the curve of the fender to the handle of a strait trs).
body and handle (al are 100% mahogany, which is one of the secrets of this skyscraper.
I put 9 in this section.

The handle is trs enjoyable: it is surprising to dpart for fender habitus, but you get used quickly and is easily playable and Access in acute is remarkable (especially because of Typical double cutaway).
The ergonomic design is perfect, it's a beautiful guitar-shaped and weighing trs light (about 3 pounds) which makes it more maneuverable than a Les Paul (one of the reasons why I have SG preferences, in addition to their nervosa.
micro severe (rhythm position on the switch) can be used for clean sounds (in any case is what I do) is your exact nickel.
micro acute (treble position) for saturation (100% spell ACDC).
DGIG it a warmth and incredible sustain of this guitar (it vibrates when fully in cheek ... never seen with another).
For me perfectly and I put 10 for this section.

She served for most of my directory pop / rock as well as clear that saturation.
Y is for fans of neo and heavy that it can find its limits (in which case I suggre not to change his pickups but to take a 2nd complmentaire Specializes scratches).

I play on Marshall amp (on which it captures its qualities sr, mine is a hybrid Valvestate 8240 stereo chorus), but also Hughes & Kettner Matrix 100, also a combo, where it wreaks havoc coupled e a multi-effects (Korg AX1500G).
It can therefore, Fawn trs versatile, playing virtually all styles (except neo and heavy and even with the support of a good multi-effects).
There is just the position of the switch in the middle which I've been using forever.
I put another 10 on this section

I use it for two months and do not regret this purchase.
Originally it was intended to be my second guitar (I have a fender stratocaster dj US standard 1973, american series equivalent of today) but it quickly became my Premire guitar (having increasing the usefulness of the dual humbucker).
The SG Special Faded is a report qualitprix excellent.
I got on thomann ... 849 (10 shipping): attention, this case may disparatre gradually (they start up a little dj prices ...).
I would do that choice after 1000.
on the other hand I found the standard too CHRE from this special, even in the VPC (plus I do not like their big varnish, which enlve to sustain: the special has a thin cellulosic mine keep a natural tone of wood: MODEL WB).
The two 490 are enough for me to get my sound (pay 300 more for a varnish and a 498 does not tempt me and make me sign away MODELS).
I put 9 because perfection does not exist.
See the source
Did you find this review helpful?yesno
Cookies help us improve performance, enhance user experience and deliver our services. By using our services, you agree to our use of cookies. Find out more.