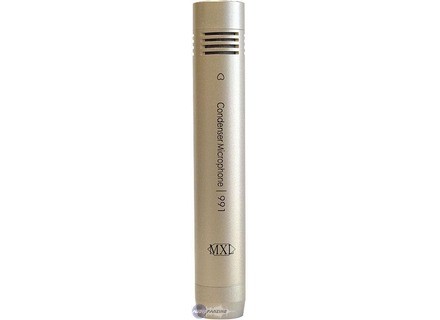 View other reviews for this product:
The MXL 991 is a small diaphragm condenser microphone that is most often found in the MXL 990/991 microphone package. This was actually the first set of microphones I purchased when I started putting together my home studio about seven years ago. I don't own the 991 any more, but it worked well for me while I had it, although it's not a real professional's microphone. The mic has a frequency range of 30 Hz to 18 kHz and picks up sound in a standard caridoid pick up pattern.

The MXL 991 is some of the best bang for your buck out there in a small diaphragm condenser mic. While definitely not the best small diaphragm mic out there, for the price it's going to be hard to beat. It's definitely worth it to get it in the 990/991 bundle as it couldn't be any cheaper for the two of them at $100 US dollars new and sometimes even cheaper if you get lucky. The mics also come with their own clips and carrying case. I've used the mic for a variety of applications, including for acoustic guitar which is probably what I've used it most often for. Like I said earlier, I don't own the mic as I sold it off a number of years ago when I moved and shrunk my studio down a bit. It will definitely pick up a lot of sound and is perfect for acoustic instruments, but isn't going to be as accurate as the next step up in something like the Rode NT5's. Still, it's a great package considering the price and it's perfect for those who are just starting their home studio and are looking to put something together at a dirt cheap price. I wouldn't recommend it for anyone other than a small home studio owner, but for those users it's the perfect mic for the price.
Did you find this review helpful?yesno
Cookies help us improve performance, enhance user experience and deliver our services. By using our services, you agree to our use of cookies. Find out more.