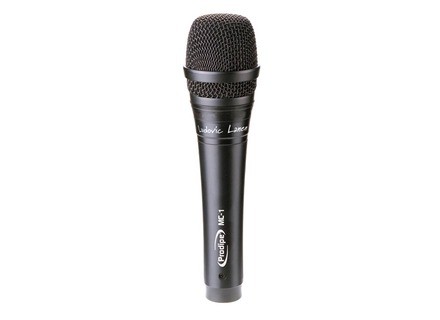 View other reviews for this product:
The Prodipe MC-1 Ludovic Lanen microphone is a higher end model in French audio company Prodipe’s line of hand held vocal microphones. Before committing to that pigeonholing of the microphone into a purely vocal usage, I must comment that the MC-1 is, considering its price, incredibly faithful sounding. And by faithful, I refer to its frequency response, and its relatively non colored reproduction of the sound that it is micing up. The Prodipe MC-1 has a fairly run of the mill frequency response that begins at 50 Hz and goes up to 16,000 Hz. On paper, it honestly is not a very impressive microphone, but Prodipe knows exactly what it is doing when it comes to budget gear. This particular microphone has a remarkably linear frequency curve, and this makes it, despite looking like and being touted as a hand held vocal microphone, incredibly capable of doing so much more. It literally fills a workhorse role in the studio and on the stage for very little. This puts it squarely in the realm of the venerable Shure microphones, the SM57 and the SM58. What is incredible about this microphone is that the Prodipe competes with both, and holds its own. While the SM57 and SM58 are consistently being used for their aggressive presence boosting, the Prodipe MC-1 maintains a fairly smooth curve, allowing an engineer much more control over the end product.

The only disadvantage I see is that engineers know how to deal with the Shures better simply because of their ubiquity. But I honestly fail to see where popularity actually comes into play when we are speaking of a microphone’s actual performance. This microphone is flatter than the Shures, and if you’re living not in France, it can be difficult to get a hold of them before buying. The low price should make the gamble lass terrifying however. So give it a shot! You won’t be disappointed!
Did you find this review helpful?yesno