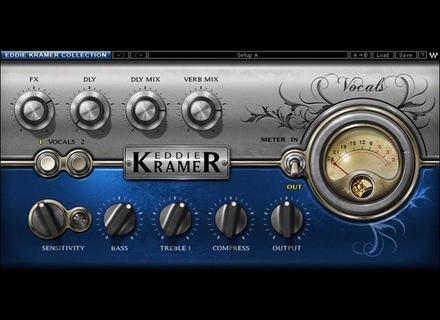 Buy this productView price information >
View other reviews for this product:
For those who don't know, Eddie Kramer has done everything from Led Zeppelin to Kiss to Hendrix and beyond. He's crazy famous in the music engineering/production world, and considering that Waves has been doing some engineer collaborations lately, it's no surprise that he got his own plugins. The Kramer Vocal Channel is basically a compressor, eq and effects unit in one. There are two different toggles to select between vocal types, sensitivity control, bass control, treble control, compression control, output control, different effects controls for reverb and delay, and a few other tricks up its sleeve.

To use this plugin, you simply enable it on whatever buss has your vocals and start adjusting. It's very simple to use. I haven't read the manual for this, but it's really not needed as it's crazy simple to use. Anybody should be able to start utilizing the tones out of this device within seconds.

Waves is the king when it comes to things like stability and compatibility. The plugin is crazy stable. I've never experienced a single crash, stall or freeze while using these. It doesn't take up too much processing power, nor RAM. That's a good thing as there could be multiple instances of this plugin on different busses, depending on how you approach it. On top of all of that, it's also cross platform compatible, so just about anybody can use this. There is one problem, however. This plugin is a 32 bit plugin for OS X. That means that whenever I use this plugin in Logic Pro, it has to use a special application to work in the 64 bit environment. It's automatic, but it's a bit of a pain as it makes the plugin disappear when it's in the background. I've been using the Mercury bundle for about half a year now, and it's pretty awesome.

This works very nicely on clean vocals. Where as the JJP approach was more of a slider approach to mixing, this is more of a knob approach. Both work nicely, and it all depends on how you approach music. Personally, I have my own methods. That's not to say this plugin is bad; in fact, it's great. It's just that I have my own little methods for mixing and mastering vocals that works best for me. Waves gives you tons of options because they know everyone likes to do things differently.
Did you find this review helpful?yesno