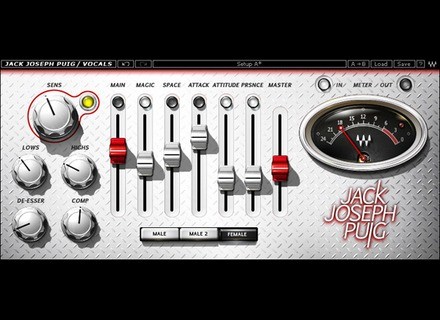 Buy this productView price information >
View other reviews for this product:
The Waves Ltd. Jack Joseph Puig Vocals is one of six plug-ins that make up the Jack Joseph Puig Collection of plug-ins. The plug-in and the full bundle is available in all formats for every DAW that I'm aware of. It has a pretty easy to use interface that stuffs a lot of different types of sounds in one place. The plug-in has three modes - two for male vocals and one for female to go along with knobs for controlling the sensitivity of the effects, lows and highs (frequencies), a de-esser, and compression. It then has sliders for the main level of the effects, master level, and then more ambiguous parameters like 'magic,' space, attack, attitude, and presence. Once you mess around with these a little bit it's not too hard to see how they'll affect your overall sound. I haven't had a look at the manual for this plug-in or any of the others in the bundle...

Right now I've got the Waves Ltd. Jack Joseph Puig Vocals and the full bundle running on my system at home, and have also used it on a number of systems at the studio complex where I work. My home studio is made up of a Mac Book Pro lap top with a 2.2 Ghz Intel Core 2 Duo processor and 4 GB of RAM along with Pro Tools 9 and a Digi 002R audio interface. It has been more than enough for me to run this plug-in for my purposes, but haven't yet had a need to run more than one instance of it anyway.

Waves' Jack Joseph Puig Vocals plug-in has a lot to offer and is a great one stop shop for vocal processing. I can't say that I like it better than Chris Lord-Alge's version of the plug-in, but it's still effective and there's definitely a good amount that can be done with it that differs from the CLA and other versions in the Signature Series bundles. It's not really the kind of plug-in you'd really want to use to get your initial vocal processing done, rather I've been using it for touching up here and there, although certainly it's useful either way. The Jack Joseph Puig Collection of plug-ins is definitely one worth looking into as it's quite cheap for Waves plug-ins and contains six plug-ins in total like this for all different applications...
Did you find this review helpful?yesno
Cookies help us improve performance, enhance user experience and deliver our services. By using our services, you agree to our use of cookies. Find out more.