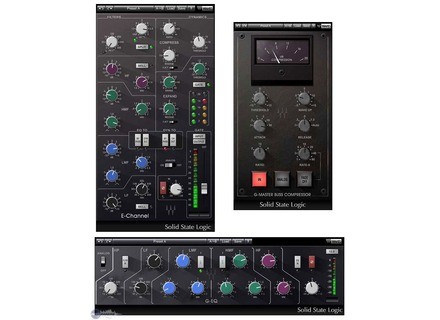 Buy this productView price information >
View other reviews for this product:
Install is quick and easy. I wouldn't expect any less from Waves. It comes with some VERY usable presets including the ones from CLA if you want fast results. But I expect most users will read the manual and want to learn the ins and outs. Everything is laid out as if you had the console in front of you. Accurate controls and everything. The accuracy to the original here is very impressive and clearly Waves did a good job making a solid recreation here.

I've used a lot of channel strip eq/comp plugins. Some cheap ones and some really expensive ones. If there's one thing I know it's that there's always something better. But I've been using the SSL for a couple of years now and for full band mixes, I'm convinced this is the best. For an EQ/comp strip this is the one I keep coming back to. It just has that magic tone that no other plug seems to give me. What's even odder is that the presets are actually usable. I can load up a whole project with drums/guitar/bass/vocals/keys and use the presets on all 10 or 15 tracks or so...and it works well. Sounds good. In that respect it's pretty incredible. I've never encountered a vst that can do that. The cpu use is great too. After you load up more than 6 or 7 you might have to freeze them individually depending on cpu use.

The SSL is on almost everything I do with a full band. On acoustic or relaxed mixes it can be a bit much but when you have a big mix, it goes a long way toward organizing the chaos. Both the eq and compression is gives to every channel is awesome and better than about anything I've used. The only thing that comes close for compression is T-racks plugs for me. The price isn't dirt cheap, but considering how much use I get it's a tremendous value.
Did you find this review helpful?yesno