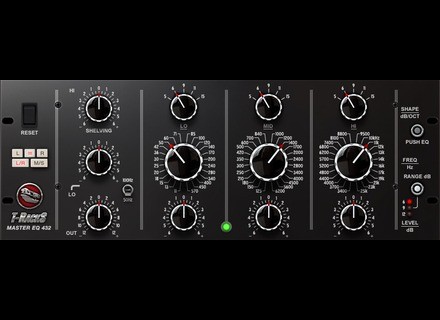 IK Multimedia releases a model of a high-end mastering EQ, for the T-Racks platform.

The new T-Racks processor, Master EQ 432 (Mac/PC) is a digital model of what IK refers to as "the gold standard of mastering EQs," but doesn't specifically name. Considering its name and the look of its GUI, it appears to be based on the high-end Sonntec 432. According to IK, the new plug-in "duplicates the original sonic character, functionality and familiar look, plus it adds extended features found in this model only. The Master EQ 432 is a stereo 5-band parametric EQ featuring 2 bands of shelving EQ plus 3 bands of peaking EQ."

Master EQ 432 runs on the latest version of the free T-Racks Custom Shop (4.5) software, which was also released today, bringing with it installation improvements and an increase in the demo period ("Try Before You Buy") to 14 days. The EQ is priced at $149 / €119.99 (excl. taxes), or 120 Custom Shop gear credits. For more information go to www.t-racks.com.