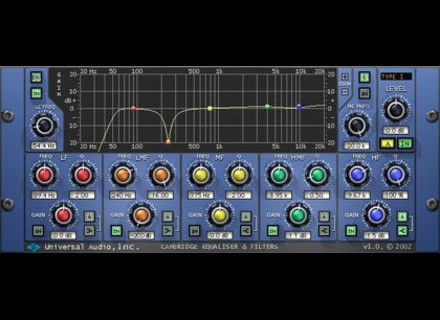 View other reviews for this product:
Universal Audio's Cambridge EQ is a software equalizer that can run in a variety of platforms.  The EQ has five bands as well as high and low cut features.  The process of installing the plug-in wasn't hard as I simply followed the basic steps that you normally would when installing a plug-in or another piece of software.  I had the plug-in up and running in Pro Tools rather quickly and since have not had any issues with compatibility or otherwise with the software.  The interface of the plug-in will seem familiar to experienced users, as I don't see anything too out of the ordinary here.  Each of the five bands has parameters for frequency, Q (bandwidth), and gain.  There are also knobs for high and low cut and for overall output level.  Anything that you do is also reflected on a graph, which makes everything very easy to visualize and understand.  I've never seen the manual for this plug-in, but it is easy enough to install and use that I don't think one is necessary.

I'm currently running the Universal Audio Cambridge EQ plug-in on a Mac Book Pro that has a 2.2 Ghz Intel Core 2 Duo processor and 4 GB of RAM and I run Pro Tools LE 7.4 with a Digi 002R audio interface.  Within this set up, I can't say that I've ever had a problem running this plug-in.  I'm able to run as many of them as I'd like within a session, and can't say that I've ever had an overload due to this plug-in.  I've been running the plug-in for about a year...

So far in my time using the Universal Audio Cambridge EQ plug-in, I've only got good things to say about it.  Not only is it easy to use and runs well, but the sound quality is clear and overall it does its job well.  I usually don't need more than five bands, so for me this plug-in has more than enough to suit my needs, and if I need more I just stack the EQs.  Universal Audio is one of the best in the business when it comes to plug-ins, and at a good price too as Cambridge EQ won't even come close to breaking the bank.  If you've got a studio of any size and are looking for a reasonably priced EQ plug-in, this one should definitely be in the mix...