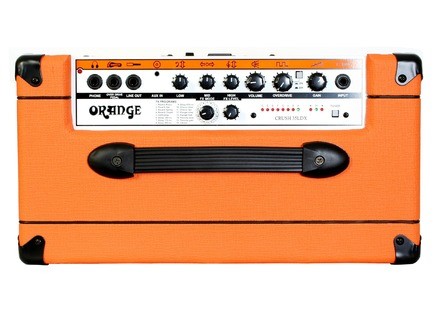 View other reviews for this product:
Transistor amp, 35 watts, with a bunch of digital effects (not the penury yet) described in other reviews. Only the rate effect is réglagle. Ie, the higher up the knob of the effect, the effect is more pronounced, without fluff sound, it is not a principle of Dry / Wet so.

Aesthetics: Pretty, everyone tells me hehe!

Well done to understand the work that the gain for the clean channel and the overdrive channel. And used to the knob Overdrive gauge upstream of the overdrive sound while the gain defines the overdrive (from soft to hardue).

It is relatively easy to obtain the desired sound.

According to what is the metal, it needs an effects pedal to push in this area there is clear. It is more typical blues, rock, hard blues.

It should totally my style of music (blues rock, hard blues).

It's simple, when I tested it, it was out of curiosity, I've never seen a small Orange at this price. I was not at all to buy it, but testing it, I found it so nickel (no kidding!) That I took. But I'm not Rottschild and it's not my style to engage in compulsive buying!

The sound is very typical Orange simply. You sound an Orange amp lamp but a transistor, so small volume too! Frankly, I love it!
This is the sound of nickel to play Blues Rock (via a soft blues rock, a Gary Moore aggressive).

The égualisation is very effective! It has a huge impact on the sound, it does not randomly dose. I believe all the versatility of this amp is in his égualisation! Nickel!

I use a Gibson Les Pauls Studio Faded, it sends! I also tested with a Stratocaster quality is also great, really!

The delay is the fact that I prefer, it is really great with overdrive, it sublime solos, really give depth to the sound. It is simple, since I use this delay, I do not remove more and I try to find a pedal that would be able to imitate (no I'm not exaggerating!). This is a digital delay apparently, but that sounds relatively analog, because rehearsals are dark and very hot. Ideal for solos, in my opinion.
But the delay can also be used to play songs with repetitions clear when you push the knob effect at noon, you can play stuff like "Big Sur Moon" Buckethead.

I use it for a little less than a year now.

I tried a lot of amp before buying, because I was looking for one (roland cube is nice but relatively small), then I was not looking for an amp lamp or special transistor, I tested all in this area, staying in a price range not too large (must not exceed 300 €). Since at the time of purchase I had no pretensions or group stage.

I love this amp sound, the character of the amp, the grain he and his delay (even if the reverb and other effects are good too, but I do not use them too).

Only thing that would have been nickel: An independent reverb, and there it was the most's MOST transistors.

Level quality / price is great! In Cygnus', we can find the price of a big pedal effect, so good!

The overdrive is good, well-defined, not messy, hot.

The clean is good and well-rounded.

The effects are very inspiring qualities.

A transistor amp great with a great sound. I've used it with a group (guitar + bass + drums + singing + me). And I'd get to hear!

Now I'll spend on it the ultimate test:

Group play with this amp with a pedalboard front.

But until my pedalboard is complete, I leave the notice as is!


A superb amp!
See the source
Did you find this review helpful?yesno
Cookies help us improve performance, enhance user experience and deliver our services. By using our services, you agree to our use of cookies. Find out more.