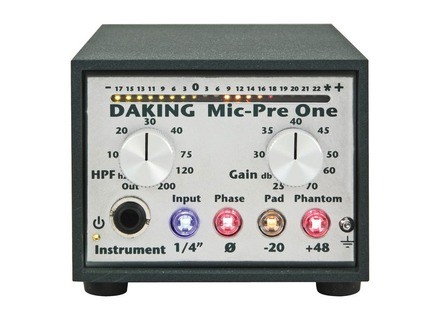 Buy this productView price information >
View other reviews for this product:
The Daking Mic Pre One is a single channel mic preamplifier and direct input box made up of all class A parts. The mic pre has all of the works that you would want from a preamp, although you don't often find them all in one place. The pre has a -20db pad, phantom power, phase reverse, mic/line selection, as well as a high pass filter with fixed frequencies from 10 Hz to 200 Hz. It has a large gain knob to set the mic input level. As far as connections goes, it has both inputs and outputs in the form of XLR and 1/4" jacks. It also has a six pin transformer connection. It isn't rack mountable as it sits in a box.

If you understand the feature that come along with microphone preamplifiers, the Daking Mic Pre One won't present you with any problems. Even if you are a beginner, I still think that you'll be able to use the Mic Pre One without any major issues. The manual might be a good thing to have around if you're new to things like this, but is certainly not necessary.

I've really got no complaints about the way the Daking Mic Pre One sounds. I've used it for a number of applications including use with both dynamic and condenser microphones. I've used it to record acoustic and electric guitar, as well as bass guitar and keyboards with using it as a DI box. The mic pre has an extremely clean sound that will reproduce the signal that you send to it accurately without a doubt. It is the type of mic pre that won't add anything to the sound on its own, but will faithfully get the job done, which is generally what I look for in a mic pre.

For a single channel preamplifier, the Daking Mic Pre One is an overall great choice. You've got a ton of options to work with, with the high pass filter being versatile and perhaps its best feature beyond just the sheer sound quality. The mic pre is definitely priced right considering how well built it is and that it is made up of class A parts. It comes in a portable box, so this would be a great choice to be both a main stay in a studio or for the traveling studio owner looking for a great sounding mic pre to go beyond what their interface has to offer...
Did you find this review helpful?yesno
Cookies help us improve performance, enhance user experience and deliver our services. By using our services, you agree to our use of cookies. Find out more.