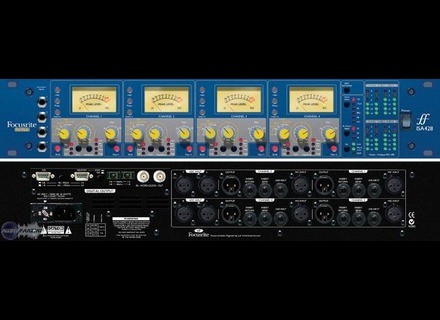 ISA 428, Solid-State Pre-amp from Focusrite in the ISA series.

View other reviews for this product:
The Focusrite ISA 428 is a four channel set of mic preamps. These are solid state preamps where each channel has XLR and 1/4" inputs and outputs. There are also 1/4" inputs on the front of the box for each of the channels if you want to go direct. It is rack mountable and will take up two spaces in your rack case.

The make up of the Focusrite ISA 428 does take a second look as it's got the full spectrum of parameters for each of the channels. Each has built in phantom power, phase flip, mic/line/instrument input selector, and impedance. To set your input gain, you've got a fixed line input parameter as well as a separate knob for making finer adjustments. It also has a button that changes the range of the input gain, as well as a built in filter. I've never had a look at the manual.

The sound of the Focusrite ISA 428 is pretty clean and transparent. It reminds me somewhat of an API, but doesn't sound as pristine to me. While these are respectable preamps, personally I prefer the Neve sound when compared to something more transparent like this or and API. Of course it depends on what you're recording, and these can be great for a variety of applications. They're perfect for a smaller or home studio owner who wants a set of cheap preamps that will certainly sound better than your audio interface's stock pres.

While the Focusrite ISA 428 preamps are pretty good sounding and will do a nice job of capturing your microphone's sound, I do think it's a bit steep for the price. While you do get four good preamps, I'd probably put the money into something like a 500 series where I could get better preamps and expand upon it. This said, it's not a bad overall deal at all and I can see how many would be attracted to it. I'd say yes for the home studio owner, but no for the pro.
Did you find this review helpful?yesno