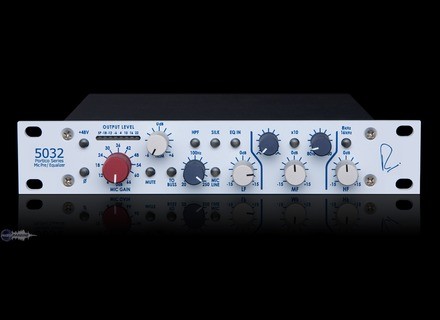 Neve. If there’s one name that causes the studio professional’s pulse to quicken, this is it! Even if the company has gone their own separate way with AMS since 1985, Rupert Neve, creator of the brand, has not hung up his soldering iron and is still creating new modules for his Portico range.

After designing products for the likes of Focuriste or Amek this famous engineer is now working for his own Rupert Neve Designs. Through their Portico products, Rupert Neve Designs makes several pledges. First and foremost a no-compromise sound, worthy of their name, but also technical choices favoring more accessible prices.

Well, I can already hear your credit cards coming out of your wallets, so let’s be clear. At an average 1200€ per module, we are not in the same league as the slew of chinese products that litter the walls of many stores. But even if Portico isn’t looking to break into the entry level market, if they keep their sound quality pledge Rupert Neve Designs will have the additional appeal of their prices.

The Portico series isn’t new, the first model came out in 2005. But since they’ve had a ‘face lift’, we decided to take a new look at these products.

There are currently 8 modules in the Portico line:

In order to bring down the price as much as possible, all models have the same ½ rack format (which is rather practical since it’s so compact) and are externally powered. Of course this isn’t the most esthetically pleasing solution, but it avoids all the intricacies and costs of an internal power supply.

In the same way, the connection possibilities are the same for all models: an XLR in/out for each channel. Each model is also equipped with a TRS jack in, which can be, depending on the modules, a bus section that allows you to connect directly into this manufacturer’s mixing consoles or an effects loop. The only drawback would be the power switch being on the back of the device. It can be seen at once that the design was conceived so that a maximum of common components would be used in all the models so as to reduce global costs.

As far as the electronics go, there’s no cost saving. All modules are made up of discrete components (electronic components with just one circuit element, as opposed to integrated components) and have custom built transformers.

This double preamp was the first product marketed by Rupert Neve Designs, and it immediately sets the tone.

The electronic design is simple and direct. The input/output transformers which are responsible for a large part of a preamp’s characteristic sound, were conceived by Rupert Neve himself, backed by all his experience on the subject.

The gain adjustment system of each channel is original and rather well made. A first knob increments the gain by 6 dB (66 dB max), while a second knob lets you fine tune between -6 and +6 dB, in order to get the finest of adjustments.

Each channel has it’s own VU meter based on a diode system, which is very precise. The traditional controls that you’d expect to find on a preamp are also present, such as the phantom power switch, phase inversion, a high pass filter, and a mute button.

Added to that is a strange feature called ‘Silk’ which directly effects the sound, by reducing negative feedback while augmenting harmonic pairs. We’ll hear it’s impact on the sound later on in the article.

As for sound , the preamp possesses large headroom. The sound characteristics are rather modern, which in my opinion suit’s a voice very well. Highs are particularly detailed, but the whole spectrum is respected.

Once ‘Silk’ is activated, things change in a subtle manner. There’s a more vintage feel to it with lows a little more active and fat, basically, more rock. This won’t be appropriate everywhere, but you get 2 really different colors from the same preamp which is quite nice.

For 1200 €, you therefore get 2 preamps, each with 2 distinct colors. At this sound quality level, it’s a very good deal!

This dual compressor/limiter is based on the same construction principles as the 5012, namely two independent channels in a ½ rack format.

The two VU meters used together let you accurately monitor the entrance level on the one hand, and reduction of gain after passing through the compressor on the other. A button lets you control either channel 1 or channel 2.

While most compressors follow one or the other of these designs, the 5043 offers both, which makes all the more interesting! Being a fan of this feature on my API 7600, whose compressor offers the same feature, I was eager to see if the difference between the 2 modes was, here also, apparent and useful.

Let it be said immediately, out of the whole Portico range it’s the compressor that attracted me the most at first. When used on drums, I’d put it in my top 3 compressors list. In Feed Forward mode, there’s a fast attack, kicks become powerful, but high frequencies (cymbals) are respected and do not become aggressive even when you push the ratio. It’s definitely musical. Used on a bass, in Feedback mode, attack is gentler and compression takes on a more vintage aspect.

Thanks to these very different settings, the 5043 will, depending on the chosen mode, be great for mixing, drum compression bus, even in premastering. A real little gem that does it all!

The 5043 is therefore my favorite of the Portico series, also benefiting from a quality/price ratio that makes it a very interesting choice to consider if you're looking for a versatile compressor.

Unlike the 2 modules presented above, the 5033 only has one channel. It’s a 5-band EQ which also serves as a line preamp. Also based on Rupert Neve processors, the 5043 lets you add or remove up to 12 dB on each band.

The input gain can be adjusted from -12 to 12 dB, which lets you use the 5033 with many sources in ideal conditions, including synthesizers, electric pianos or other instruments with widely varying line outputs.

The high and low bands are shelving filters, while the other three bands are parametric with 'Q' adjustment. It’s worth mentioning that low-mediums, medium and high-mediums can be bypassed independently, for a more direct signal. The highs and lows can only be deactivated simultaneously.

In use, this EQ is very musical on all bands. Accurate and providing very fine adjustment, it will sculpt your sound to what you want it to be. Even though it’s able, if necessary, to drastically change the character of your sound, you can still push the settings to their extremes without the sound becoming unpleasant, which is the hallmark of good EQ.

The other modules tested

The other modules are variations of different preamp, compression, and EQ modules (from 5 to 3 bands, but which work in the same way), in order to meet all needs as best as possible. Thus, the 5032 (Preamp - EQ) is very well suited to tracking a voice. The 5015 (preamp-comp) will be perfect on a bass… all configurations are therefore possible!

Below are some examples I put together:

It was about time that we lent an ear to these great achievements from a legend of the audio world. With their new look, which is much nicer than the old cheap-looking facade, they now look the part. These modules have, in all cases, impeccable sound quality and a genuine character.

With their 2 distinct modes, the preamp and compression modules are very versatile and very useful tools for handling all kinds of sources.

Because of their interesting price, at least for the stereo modules, they should be on your test list.

[-] The price of single channels
[-] Power Switch on the Back