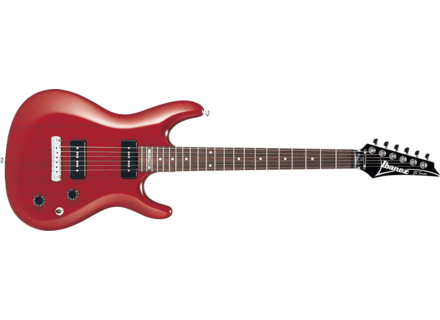 JS700, STC-Shaped Guitar from Ibanez in the Joe Satriani series.

View other reviews for this product:
For some reason, Ibanez decided to make a P90 hard tail version of the JS. Why they made this, I'm not exactly sure why. On top of that, these guitars were made in both Japan and Korea, and the quality varies depending on where the guitar was made. The guitar has a mahogany body with a maple neck and a rosewood fretboard, 22 frets with dot inlays, a hard tail bridge, two P90 pickups, one volume, one tone and a three way toggle switch.

The number one thing that bothered me on this guitar was the bridge. It felt very odd. In fact, it was almost like I was playing some bizarre Les Paul Junior or something. The angle felt weird, and I just couldn't give with it. The thin Ibanez body wasn't doing it any favors, either. The rest of the guitar was decent, although this one was a Japanese model. The frets weren't sharp, and they were decently crowned. I didn't bother messing with the action as I really disliked the bridge on this model.

The pickups in this didn't sound that great, honestly. I'm normally a big fan of P90 pickups, but these seemed to lack something. Usually, a P90 sounds like a polite man's single coil. It has that aggression and cool character, but it doesn't have the obnoxious treble. They also tend to stay together better than the singles, sound wise. That said, these seemed to lack all character that I normally adore about P90s. The bridge was kinda muddy, and the neck wasn't anything that impressive. The clean tones were decent, but that's about it.

The guitar didn't sound too good, and I'm not sure whether or not that was from the odd P90 pickups, the hard tail bridge installed on this, the actual wood itself or what. I just wasn't digging this guitar for whatever reason, and I'm not really sure why it was made in the first place. I can't recommend buying this, but I'm sure there are some people out there who'll love it.
Did you find this review helpful?yesno