The best studio headphones for about $100

You can get some pretty good headphones for about $150 and while 50 bucks may not seem like much of a difference, it's a bit too much for many home studio owners. But don't worry if you are one of them, there are plenty of interesting cans for a tad less money. With this in mind, we asked our members of our French site to name their favorite pair of studio headphones for about $100, and we thought you might be interested in the results: 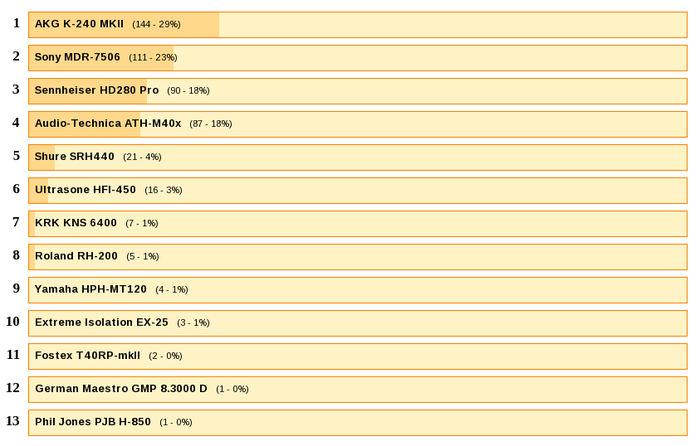 492 Audiofanziners took part in the poll and these were their favorite picks:

The K-240 MKII by renowned Austrian manufacturer AKG sit comfortably at the top of the list with almost one third of the votes. These semi-open cans have convinced a great diversity of home studio owners, mainly due to their lightness and the unbeatable comfort they provide. The lows are generally quite gentle and the highs are well-developed, perfect to hear the slightest details of your musical productions.

The Sony MDR-7506 came in second in the poll, with their on-ear, closed design they are very popular among DJs and in recording studios. Their frequency response curve is far from being linear and they can become tiring after a while. However, the fact that they can exacerbate certain details makes them very useful in many situations.

While the ATH-M50x have found a niche in the $150 category, the smaller ATH-M40x managed to find their way unto the podium for $100. They feature the same 40m drivers inside a closed shell, two detachable cables and 90-degree swiveling ear cups (with DJs in mind). They weigh 8.5 ounces (240 g) without cables and are rated at an impedance of 35 Ohms to be able to adapt to any situation.

Not far behind were the Sennheiser HD280 Pro. Their rotating ear cups and up to 32 dB of noise attenuation (due to their close design), are very powerful arguments. The manufacturer recommends them especially for night clubs where the SPL can be very high. Their modular design allows for an easy replacement of parts and the fold-up design makes them easier to carry them with you.

Other headphones in the poll were: