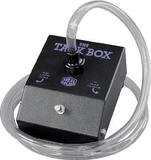 History of the Talk Box

Although many hits have been marked by the Talk Box sound — take, for instance, California Love by 2Pac, Livin’ on a Prayer by Bon Jovi or Pigs by Pink Floyd — it still remains a little known effect. Often confused with the vocoder, the wah wah and even auto-tune, this mighty vocal machine is much older than you might think. At a time when there's an '80s revival going on with songs from the likes of Zapp & Roger (Troutman) and Stevie Wonder having a lot of success, it's a good moment to stop and discuss this somewhat shunned effect.

Man in the box

As an introduction to this article, it's important to recall what a Talk Box is. This effect allows you to modify the sound of your guitar or keyboard with your mouth. The unit is composed of a box with a speaker (often a compression driver) linked to a plastic tube. The speaker reproduces whatever you play on the instrument plugged into the Talk Box. Sound will flow through the plastic tube and the musician can use his or her mouth as a sound box introducing the plastic tube into his or her mouth. You only need to form words without actually pronouncing them to modify the sound coming out of your mouth. Since the SPL produced is quite low, it's recommended to "sing" with it into a microphone.

Okay, now you know the basics about how the Talk Box works. But do you know where it comes from?

The first traces of a voice modulating an instrument date back to the 1930s. To be more precise, it was in 1939 that guitarist Alvino Rey, a pioneer of guitar amplification and the pedal steel guitar, composed songs brightened up with the unique sounds of what he called the "Singing Guitar." Amazed by the possibilities of the laryngophones, a contact microphone placed against the throat of a speaker to pick up voice vibrations, he convinced Luise King, his wife, to sing with the device connected to his amp. That way he could play a string instrument and modulate the singing of his wife. In fact, Luise would not even come onstage. Instead, Stringy, the singing guitar, would steal the show. The following video dates from 1944:

At the same time, one Gilbert Wright would develop the Sonovox, the ancestor of the Talk Box. Legend has it that the system was born from a seemingly trivial daily situation. Wright was shaving with an electric razor when his wife started a conversation. Hi replied when the razor was against his throat, producing a strange sound, as if the razor wanted to say something! An idea was born and soon thereafter the razor was replaced with two speakers.

The Sonovox truly heralded the Talk Box, considering that the sound came from the mouth of the musician and you could form words articulating them. This innovative technique seduced different professional sectors. It was used, for instance, in several Hollywood films (including Walt Disney's Dumbo in 1941), and radio. However, when it came to music, the Sonovox was way too ahead of its time and, hence, was not very widely used. The most notable appearance of the machine was on the Sell Out album by The Who in 1967.

The actual Talk Box made its debut in the '60s. And once again pedal steel guitar players were at the origin of the concept. Pete Drake and his guitarist, Bill West, came to the idea of using a plastic tube to transport sound from a speaker directly into the mouth instead of the throat! Pete Drake's Forever, released in 1964, demonstrates the possibilities of the Talk Box. The sounds that would mark the history of music several years later come from this time, but the volume was too weak, which limited its use to the studio. Moreover, the few machines available were simple prototypes made by Bill West.

The effect would really start to make it into the music world in the '70s, when Peter Frampton introduced the Talk Box to the world with Do you feel like we do (1973). He first discovered the possibilities of the futurustic box when he met Pete Drake in Abbey Road and it would take him no time to adopt it.

Another important artist to use the Talk Box a few months before Frampton was Joe Walsh, who used it on his Rocky Mountain Way song (1973). Like his colleague, the future Eagles guitarist (he joined them in 1975) discovered the pedal through Pete Drake. He even asked Bill West for a unit and got it.

West actually owes the first commercial production of the Talk Box to Joe Walsh! As I mentioned before, Bill West's machine was hardly fit for live applications. The company Kustom Electronics introduced its own version of the effect, called The Bags, but it was a commercial flop. Nevertheless, you can hear The Bags on Sex Machine by Sly and the Family Stone (1969) or on Jeff Beck's She’s a Woman (1975).

Walsh was unsatisfied with his machine and decided to discuss it with his friend Bob Heil. Heil decided to create a more powerful pedal inside a fiberglass box – and thus was born the most popular Talk Box ever, the Heil Talk Box.

But the use of the Talk Box was not limited to rock in the early '70s. I've already cited Sly and The Family Stone, but an entire sector of the R’n’B and funk community was fascinated with the vocal effect. In 1972, Stevie Wonder made a big splash with an album that would become a classic: Music of my Mind. Every single song on the album was entirely written, performed and produced by him, who took the opportunity to declare himself a Talk Box fan.

Many artists started following in the footsteps of these pioneers. Some used the Talk Box sparingly, for solos, like in Pink Floyd's Pigs (1977) and Nazareth's Hair of the Dog (1975), or for introductions, like Aerosmith on Sweet Emotion (1975) and Steely Dan on Haitian Divorce (1976).

Some others abused the effect, most notably the unquestioned master of the Talk Box, Roger Troutman. The former Funkadelic member created Zapp at the end of the '70s and bet everything on his dear pedal, having a great influence on the disco-funk, electro-funk, and later on hip-hop scenes. He was actually one of the songwriters of 2Pac's hit California Love (1996).

However, the Talk Box has been clearly neglected by rock musicians the last 20 years. Fortunately, hip-hop and electronic music have taken over, as demonstrated by Chromeo with their funky Canadian electro-pop (Needy Girl, 2004), DJ Quik's West Coast hip-hop (I used to know her, 1998), and Daft Punk with their robotically famous Around the World (1997).

More recently, the Talk Box has had a sensational comeback with Bruno Mars' 24K Magic. The '80s revival seems to still have some good days ahead…

By now you are all probably drooling. And many have an irrestrainable impulse to buy a Talk Box… Here's a brief guide to help you get the best bang for your money.

The principle behind the Talk Box couldn't be simpler, but for it to work you need a couple of things: a pedal, a microphone, some sort of sound system for the latter, and an amplifier. Okay, now let's stop here for a minute. Most Talk Boxes act like a simple loudspeaker, as I already said. But a speaker needs a powerful electrical signal to stimulate it, which requires some sort of amplification.

There are several solutions for this, depending on the instrument. A guitar player can plug his guitar into an amp and then place the Talk Box between the amp and the guitar amp. This will allow him to activate and deactivate the Talk Box, toggling between the sound of the pedal and the regular guitar sound. 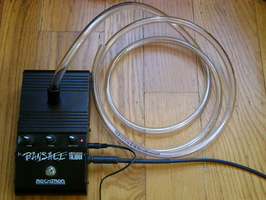 If you have a stack, it's pretty straightforward because the amp head will necessarily have a 1/4" jack speaker output. This results in the following setup: Guitar —> Amp head —> Talk Box —> Cab. Don't forget to use speaker cables (not instrument cables) between the amp head's output and the Talk Box input, and between the output of the latter and the input of the cabinet! If you use a combo, some of them feature a speaker output but some others don't. If the latter is the case, you'll need to modify the cabling between the power amp and the internal speakers to insert the Talk Box. Yes, that requires you to know what you are doing, and messing around with a guitar amp can be dangerous. So get professional help!

Correct, it's not easy to integrate a Talk Box into your setup. Especially since you need to adapt the impedance of the pedal (usually 8 Ohms) to that of the amp and the speaker. The speaker will actually receive the signal from the amp (when the pedal is not active) and the signal from the Talk Box (when activated) with the corresponding impedance. In the end, guitar players might want to do as any keyboard player would and use a dedicated amp for their Talk Box setup. Any decent and affordable amp ought to do the trick. Plus, you don't need an extra cab and an ABY Box will allow you to play with your favorite amp.

To finish, I'll mention one last possibility that simplifies everything significantly: get a Talk Box with a built-in amp! Any guitar or keyboard player can then make use of it right away because you just need to plug your instrument into the box and it will simply work. These Talk Boxes have an output to send the signal to an amp and use the latter whenever the pedal is inactive.

Okay, now that you know how to use your pedal you only need to be patient! Far from being a simple toy, the Talk Box is an art in itself that requires lots of training to master. You will first need to learn to form words so that they are as intelligible as possible, adapt your guitar or keyboard playing to the demands of the machine and sync your instrument and your mouth. What are you waiting for? Go, start practicing!

PS: Clean the plastic tube from time to time, because it can get really disgusting!