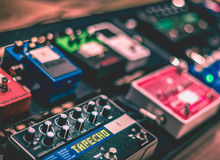 The long-awaited poll regarding "small" guitar effect pedal brands is finally here! It's open season for anybody who likes controversy!

By popular demand, we asked our French readers to vote their favorite "small" pedal manufacturers as a follow up to our previous polemic poll regarding "big name" pedal makers and here are the results: 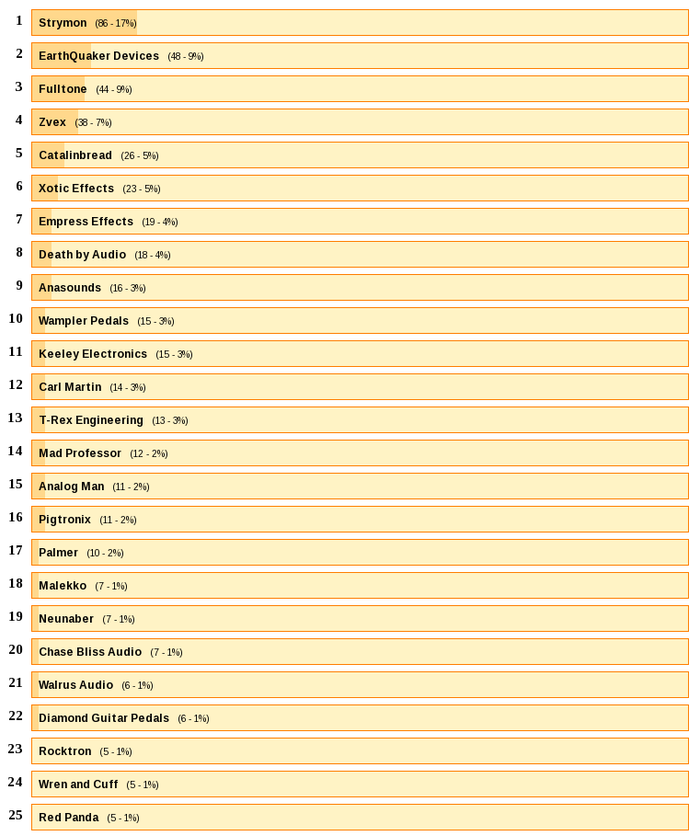 507 Audiofanziners took part in the poll and it somehow didn't surprise us at all that Strymon clearly dominated it. EarthQuaker Devices, Fulltone and Zvex also stand out from the rest which remain pretty even.

Strymon could've easily been included in the big brand poll given the importance it has garnered in recent years. However, Strymon remains a small company with a "minor" impact, since their production capacity is significantly lower than that of Boss or Electro-Harmonix.

Before choosing the name Strymon, they were known under the Damage Control moniker. The US company featured tube pedals since 2004, but in 2009, the company decided to change their business strategy and name.

It hasn't taken long for Strymon to find their pace in the market with their digital effects and a strong emphasis on quality, high-end gear. They aren't exactly cheap, but that hasn't stopped them from having quite a few best-sellers, including the BigSky reverb, the Flint tremolo/reverb or the El Capistan delay.

EarthQuaker Devices' second place is probably the only surprise in the poll. There's no doubt that the brand is reaping the benefits of their strategy based on offering a plethora of user-friendly products. Their catalog is quite impressive and diversified enough to suit any budget. Furthermore, all EarthQuaker Devices pedals are handmade one-by-one in Ohio, USA..

Several factors distinguish Fulltone from the two first brands in the list. First of all, the company is much older: it was established in 1991. Its founder, Michael Fuller, is passionate about vintage effects as the company's catalog proves. They offer, for instance, a uni-vibe (the Deja'Vibe) which resembles a lot the original one. But THE Fulltone pedal par excellence is the OCD, a world-renown overdrive that can be found on countless pedalboards.

Zvex represents the quintessence of so-called "boutique" products. For starters, all of the brand's pedals are hand painted in a very original fashion. Further, the manufacturer displays a constant desire to experiment with new things, like the Nano Head, a mini tube amp head, or the Candela Vibrophase, a phaser pedal that works with a... candle! However, Zvex doesn't limit itself to crazy effects. They have actually made quite a name for themselves with their fuzz pedals. And they seem to be gaining quite some traction, as the fourth place in our poll of "small" guitar pedal brands shows. Other brands included in the poll were: