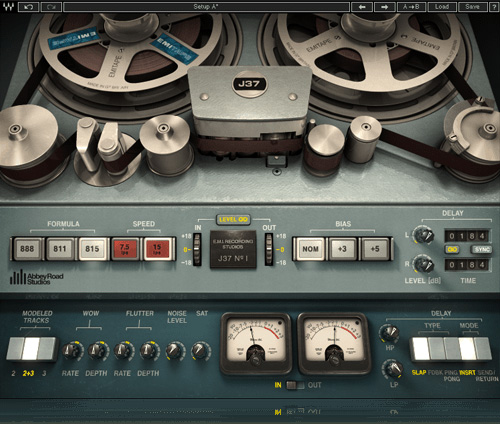 As you probably have already noticed, tape saturation is really hip right now. Although already having plug-ins in the same genre, a leading publisher like Waves couldn't simply ignore the current frenzy for such products. And that's where the J37 Tape comes in. Can it stand out from the rest? That's what we are about to discover...

En route to the abbey

The J37 Tape is once again a fruit of the collaboration between Waves and Abbey Road studios. It's the modeling of a four-track J37 tape recorder manufactured by Swiss company Studer. This multitrack recorder was used in the famous studios during the second half of the '60s and the early '70s. It was greatly responsible for the sound of Sgt. Pepper's Lonely Hearts Club Band: George Martin used it excessively to create successive sound layers on the cult album by the Fab Four. The technicians at EMI Studios customized the recorder to adapt it to their own standards, which was pretty common at the time. The plug-in comes with three tape formulas conceived by EMI and used exclusively at Abbey Road studios: EMI TAPE 888, 811 and 815. 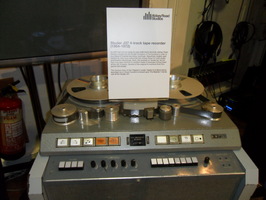 From a practical point of view, the J37 plug-in is available natively for Mac and PC in VST, VST3, AU, RTAS and AAX formats (64 bit). Also note that a SoundGrid version is also available. Installation and authorization are easily done using the Waves Complete V9r14 and Waves License Center apps. We used a MacBook Air Intel Core i7 2 GHz with 8 GB RAM running Mac OS X 10.7.5 for the test. The DAW we used was Reaper 4.54. And, for the sake of information, one J37 mono instance uses about 2% of CPU resources, while a stereo one uses from 3% to 5%.

No gain, no pain 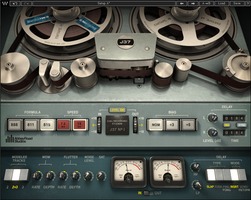 The first thing that strikes you as soon as you launch the J37 is the GUI. It's very nice, indeed. Until you realize that half of it is an amusing tape animation that's merely an eye candy and, strictly speaking, has no practical use. Isn't the screen already full enough as it is? Anyway, let's put that aside and focus now on the different tape types and the playback speed. We sent a virtual synthesizer through the J37 with the following settings: first the source signal, then tapes 888, 811 and 815 at 15 ips (Nominal Bias), then 888, 811 and 815 at 7.5 ips (Nominal Bias) and, finally, tape 815 with +3dB Bias and +5dB Bias at 15 ips.

The differences in terms of frequency are subtle because we didn't increase the input gain excessively, so harmonic distortion is limited. On the other hand, there's a lot happening with the transients. Especially with tape 811 at 7.5 ips, which smoothens them severely. But that's a good point, considering that it's the typical behavior of a tape recorder. A problem we detected during the review is that there's a short silence whenever you change settings during playback. Very annoying when your are trying to AB something. Judge for yourself:

We also played with the In(put) gain in order to get more or less saturation. By the way, the plug-in offers the possibility to link the input gain to the output level, which is really practical to avoid being fooled by louder sounds. The results sound very nice, ranging from a light distortion to real "thrashy" sounds. You should pay attention to the input level, because the J37 seems to be quite sensitive at that stage. So, take it easy with the gain or you'll end up with a mash of sound! Fortunately, Waves included a calibratable VU-meter for you to keep visual control of the levels. Although small, it seems to work pretty effectively. You can see it in the screenshot opposite where we compare it to our usual VU-meter.

Besides the saturation induced by the tape recorder, the publisher also added a "Sat" potentiometer that allows you to add another layer of saturation. That's nice, isn't it? Well, yes, but don't abuse it, because it can sound artificial very quickly.

To test the plug-in further, we decided to use a drum loop and insert a J37 on every drum element, plus another instance on the bus. The sound always met our expectations. Nevertheless, we have a remark to make at this point: Unlike some competing products, the J37 doesn't offer the possibility to group several instances and control them from one single interface. It's a pity, especially considering that the quintessence of this sort of tools is to use one plug-in instance on every track of a project.

What would a tape recorder be without wow and flutter effects? With that in mind, Waves naturally added independent Wow and Flutter controls. Once again, take it easy with them because they can become excessive very quickly. That said, used sparingly, they can be pretty effective. The only snag is that, when you tweak the Wow and Flutter settings, it becomes more evident than ever that the huge interface with tiny buttons is very annoying. The readability is extremely limited.

Once we got over the screen issue, we decided to see what the three "Modeled Tracks" buttons do. The original J37 being a four-track recorder, Waves decided to model tracks 2 and 3, as well as 2+3. Available only in the stereo version, the latter aims to reproduce the crosstalk of the recorder. To highlight this phenomenon, we used a stereo instance with a mono synth. The effect is subtle, but the sound does feel bigger and livelier. A stereo analyzer confirms this:

It's time to talk some noise now, which, to our surprise, is something the J37 seems to lack of. It certainly has a noise level control, but it seems to be added to the source signal without actually affecting it too much. Yet, on a hardware unit the noise does have an impact on the signal recorded. To be sure, we ran a "zero-sum" test with a vocal track processed with the J37, adding to it a good dose of noise. We then duplicated this signal and inverted its phase. The outcome was purely noise. The good news is that it proves that the noise generated by the J37 is random, since we didn't get perfect silence. The bad news is that our first impression was confirmed: The noise does not affect the source signal, otherwise we would've ended up with a more or less distinguishable vocal track after the phase inversion test.

To finish, we used a plug-in instance on every track of a rough mix. Once again, we dearly missed a grouping function here. But apart from that, the result is interesting all the same. You can clearly perceive the glue effect between tracks, which is nice, plus the mix gains some presence. From a dynamics point of view, there will be no need for you to use much compression. On the other hand, you will need to do some EQing on most tracks to fine-tune everything before automation, especially in the low end where it is a real mess. 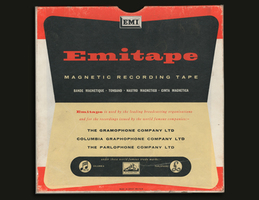 In addition to the Abbey Road tape recorder emulation, Waves incorporated into the J37 a Delay section that is meant to reproduce the warm sound of a tape delay. Even if not very generous in terms of controls, it is certainly musical. Three delay modes are available: Slap, Ping-Pong and Feedback. You can control the delay level, depending on the type selected, as well as the delay time, which can be synced, or not, to the host sequencer. And, finally, a high-pass and a low-pass filter complete the Delay output section. We would've liked to have a bit more control over it with, for example, pan, but it nevertheless sounds very nice and there's no need to be such killjoys, anyway. You can listen to it on samples 28 to 30.

We have never had the chance to put our hands on the famous J37 that helped the Beatles sculpt their sound, but still, we have serious doubts that this modeling is 100% faithful to the original. The "tape sound" is evident in a way, but it somehow lacks that special something that inevitably makes us smile whenever we turn on our real Studer A800. Granted, it's not the same model, but we expected something better from Waves anyhow. Moreover, the plug-in doesn't seem to be very easy to control, given its sensitivity. Rookies will have it easy to ruin their sound if they aren't cautious with the input gain. Add to that a GUI that is sexier than it is useful and you end up with a middle-of-the-road product. Nevertheless, the Delay function is there to take some of the bitterness out of it. Anyway, and as usual, don't take our word for it: The publisher has a demo version available for you to download and try the J37 on your productions.