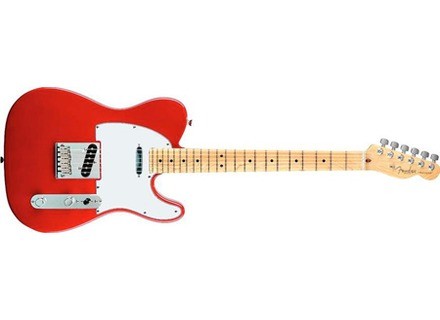 View other reviews for this product:
As the title states, this Telecaster is American made, which is always a good thing with Fender. It has a standard bridge, a maple neck (though I've seen variations), maple fretboard, two single-coil pickups with a three way switch, a volume and a tone knob below the strings.

The cutaway on this guitar does provide really easy access to the higher frets, which is great news for lead players. The sound, actually the range of sounds, are pretty easy to get. It might require time for less seasoned players to get the sound they are looking for, but the diversity of tones is actually the main selling point of the instrument. It's a bit heavier than some Fender guitars, but nowhere near as heavy as a Gibson Les Paul, and the shape is standard Tele. The drivers are stable on my instrument, at least. Playing this guitar is a dream, it's very smooth and it's not taxing on the fingers at all.

The Tele sounds really great with a Marshall or Fender amps. A bit noisier than Les Pauls, they still manage to rock pretty hard, and are capable of beefier tones than my normal go-to, my Strat. I like the range of tones that you can get with simple amp and pickup manipulation. Even without tons of gain or effects, you can go from a thick, jazzy tone to a twangy country tone to a ripping electric blues sound easily. With distortion, you can really mess with the pickup selector switch and do some interesting effects (something I learned from Tom Morello in an interview, which I haven't been able to clearly replicate on another guitar). I would say that this guitar, if I needed it to, could suit my style pretty well, since I like to be able to genre-hop.

I love the versatility of the tones more than anything else, followed closely by the comfort and ability to play. I've tried lesser, cheaper Mexican and Japanese Teles, as well as other brands' imitation Teles, and I've never gotten results as thrilling as the ones I did with this. I think that this is a great purchase, and it's worth it to seek out a high-quality, preferably older used model than a newer one. It's worth the investment because you won't find yourself getting frustrated with it as you mature as a player, the way I did with many other guitars.
Did you find this review helpful?yesno
Cookies help us improve performance, enhance user experience and deliver our services. By using our services, you agree to our use of cookies. Find out more.