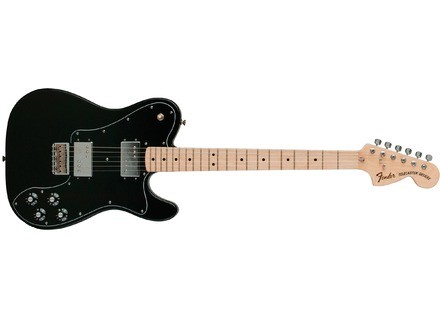 « Straight Reissue of the 72 Telecaster Deluxe »
5

Buy this productView price information >
View other reviews for this product:
The 72 Tele Deluxe is one of my favorite Fender Designs. In the 70s guitar makers were willing to take chances unlike anything before or after. They were coming out with new iconic designs not endlessly reissuing stuff. This tele is unique in the Fender world. t has more in common with a Les Paul than a tele and is very 70s in design. In the late 60s Fender was trying to compete with Gibson for a guitar that was good for hard rock music. The traditional singlecoils that Fender used in most of their guitars were not well suited for higher gain types of music and applications. Around that time Fender hired a guy who used to design pickups for Gibson. He made Fender a humbucking pickup to use in their guitars. This pickup was the Widerange pickup. The 72 Deluxe tele is very 70s in design. It has a neck similar to that of a 70s Stratocaster. It has the large 70s headstock which I like. It has the 3 bolt neck joint with the micro tilt adjuster. The Deluxe has a strat style hardtail bridge instead of the ashtray bridge because there are humbucking pickups in it. It has dual Widerange Fender pickups and a Gibson style control setup with a volume and tone knob for each pickup and a 3 way toggle to switch among them. Im sure many Telecaster traditionalists were mad at this design when it came out but this guitar was not made for them it was made for the modern player at the time who wanted a Telecaster that could do more modern sounds.

To go with the modern player concept this guitar had a flatter neck and bigger frets to allow more expressive playing along the neck. Old Telecasters have 7.5 inch radius necks which do not allow much of a good action at all. The Deluxe has larger frets than the stratocaster at the time and the fretboard radius is flatter. It has more of a Gibson type feel to it. Since this is a bolt on Fender guitar there is quite a large neck joint heel where the bolts are and this may get in the way of the higher frets. The 3 bolt neck is not a problem although some people hate it. It works just as fine as the 4 bolt ones did and with the microtilt you dont have to take the whole neck off to shim it. I think people just saw back in the day that it had one less bolt and assumed it was worse. I have seen guitars made by boutique makers that cost thousands and thousands of dollars that come with 2 bolt necks so dont tell me 3 bolts is not enough.

The Widerange humbuckers would have been hot super modern pickups at the time but nowadays they fall into the vintage catagory like most other things from that era. They are hotter that the single coils that you would have gotten otherwise but they are by no means hot pickups by todays standards. They have a very vintage voice to them. This is probably the smoothest sounding solid body telecasters out there. The tone of the pickups is very p90 ish but with more bottom end. It does not have the telecaster quack that tele players may be use to. With the smoothness there is a bit of a loss of clarity in the tone. Overall there is a nice old school woody tone to the guitar. This guitar also has a great jazzy tone. It is very warm without getting boomy. The additional tone control lets you really shape the tone more than you could with a traditional tele. You can have the twang or bang with just the adjustment of the tone knobs.

This is such a great Telecaster design there is no wonder they have been reissuing it for a long time. People like me like the tele design but cant find anyway to use the tele sound. The one thing I would have changed if I was designing this guitar is I would have thrown away the amp knobs the guitar uses and put on some Gibson style speed knobs. There is no silly ashtray bridge here. It has a normal strat style hardtail bridge so it feels like a strat, and with the neck it plays like a Gibson. With this guitar you get a smoother more usable sound with the tele looks. And plus it has a big headstock. A big headstock makes everything better.
Did you find this review helpful?yesno
Cookies help us improve performance, enhance user experience and deliver our services. By using our services, you agree to our use of cookies. Find out more.