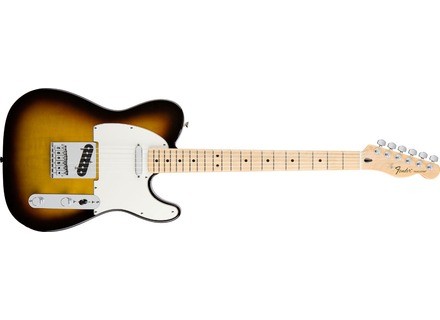 Buy this productView price information >
View other reviews for this product:
Fender is probably the biggest music company in the world when it comes to amps and guitars. They have singled handily take probably the largest portion of the amp and guitar market. Their instruments have been played all over the world from beginner learning guitar players to the best professionals in the world. Any guitar who has ever been playing the guitar or even seen a guitar has probably come across a Fender Telecaster at some point.

This is great guitar for those needing a solid sounding Fender telecaster made in America. This guitar has a great feel and pleasurable tone. The instrument gets a solid sustain and a nice rounded clean tone that is fitting for many country guitarists and mild gain players. It is one of the most easily recognized guitars shapes and guitars in the world and one of the most easily recognizable sounding guitars as well.

The tone of these guitars do not change from any other Fender Telecaster that anyone has ever played. If you have played one American Fender Telecaster than you know exactly how one sounds. There is a reason why so many people have turned to the Tele for their tonal needs. They have a great feel and ease of playing that makes for a quick comfort and tone that is unmistakably a Fender Telecaster. There isn't too much variation of tone between Teles, some have a better feel that others and some resonate better than others, but that goes for any guitar built. You can tell the difference in a Gibson Les Paul, a Fender Telecaster, and Fender Stratocaster. They each have their own tone and sound that uniquely their own. So the Tele will do only what a Tele will do and a Les Paul can't touch that and visa versa.

At new these guitars come in right at around $999 which is a steal of a great price. If I were in the market this would be about the best you could do for an American made Fender Telecaster guitar. I would recommend everyone to own at least one Fender Telecaster. They are a great for clean player's who need a clean gain tone or a good sparkling tone.
Did you find this review helpful?yesno
Cookies help us improve performance, enhance user experience and deliver our services. By using our services, you agree to our use of cookies. Find out more.