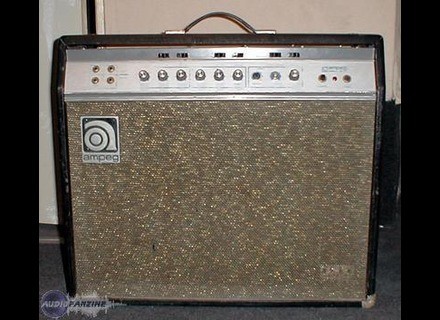 View other reviews for this product:
I think the other review is wrong. I have a 1969 gemini 22 in absolutely pristine condition but its actually a 2x12 speaker configuration. I have researched this amps alot and wanted one and when one popped up I had to buy it. Its an all tube design with a claimed 44 watts power from 6l6 power tubes. In actuality the amp is probably a little more like 30 watts from what my amp guy tells me. It has 4 inputs that can be jumpered to achieve even more sounds then is already available. Its two channels. both channels has a normal bright setup. Channel one also can be used to run tube driven tremolo/vibrato as well as world famous ampeg reverb. The tremolo is divine and has a warm vintage feel to it. highly acclaimed in vintage users. There is a treble and bass knob for each channel which is nice to have independent eq. There are also several rocker switches that control the highs and bass as well for both channels independently. The tremolo also has a on beat/after beat rocker switch as well as a vibrato/tremolo selector. Power switch in front with a polarity switch. The standby is in the back. I believe it runs at 4 olm loads but I could be wrong about that. In the back it has hum balance, ext cab output, ext amp input, fuse.

The sound of it is instant vintage creaminess. Its sounds very fendery. Maybe alot like a fender twin. Its a super clean sound resultant from the 6l6's and gets plenty loud!!! I play it with my band and it is more then willing to keep up with drums another guitar, 4x10 bass, and p.a. it wont need to be miked. I also have a ampeg vt-22/v-4 and i can get almost similar sounds as the v4. I think i will make a video a/b both units and put it on youtube and show you what i mean. It has super amounts of headroom and wont break up unless at ungodly levels. A pedal players dream really. I play big muffs, fulltone ocd, phase 90, mxr flanger, clyde deluxe wah, fat boost and a boss eq. The amp is interesting when compared with my v4 in that its a tad bit easier to dial up a vintage sound (fender) where the v4 needs the eq tweeked considerably as well as using the boss eq to get a brighter sound (fender) out of it and not being so muddy. the gv-22 can achieve some of those awesome v4 muddy cleans by turning up the bass and hitting the rocker switch. In addition the v4 is a monster. the cab for that amp is 88 pounds and awkward as hell to move even a few feet. Little lone in and out of back seats. The gv-22 is alot easier to manage at around 55-60 pounds with a smaller enclosure. When I bought the v4 i disregarded people complaining about the weight of the amp but have hence found out that this is a crappy amp to deal with. It sucks to move around. The gv clearly wins. The reverb is awesome in this amp and kind of has a surfy tone to it somewhat (fender) a little different from the v4 but both are awesome. If your into the pixies it sounds exactly like their reverb for guitars. The tremolo is awesome as well, killer sound. Vibrato sounds good but i'm not a big fan of vibrato so i really don't know/care what is good or not. The gv sounds awesome through either humbuckers or single coils. I have a strat and les paul custom and they both sound great through the amp. The v4 i always thought sounded the best with the les paul for some reason but that might just be in my head.

The sounds you can get out of this are amazing, pretty much like any vintage amps. You can get the punchy v4 sounds like the rolling stones, country, surf, classic rock if you have a good overdrive pedal. My favorite sound out of it is grungy garage rock ala mudhoney. Sounds sick like that. Also with a big muff this turns into an awesome sludgy amp ala the melvins. The clean sounds are amazing and could be used for jazz, country rock, pretty much anything i imagine.

I pretty much consider it a fender twinish amp that is alot cooler because its not a fender! People see it when i'm on stage and ask what the heck is that? Are you playing a bass amp? No, no simple corporate stooges that will buy what ever nickleback tells them too. Its a 1969 amp that I got for a quarter as much as other vintage amps, that is a workhorse amp, with all the features one desires, topnotch build quality and gives a guitar player a rare thing. Finding and achieving his/her own tone and not ripping off jimi, stevie, jimmy, or whoever else is out there that people worship with religious fervor. (p.s. i love all those guys too but people music sucks more now then it has since the 20's we need a change)
Did you find this review helpful?yesno