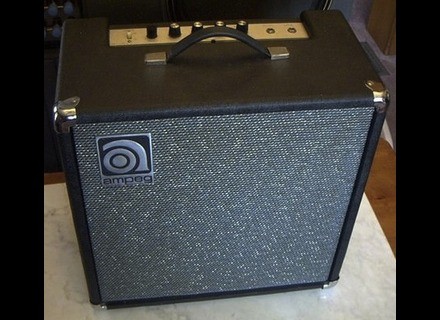 This is a 18-watt all-tube amp. For someone who is accustomed to 18-watt AC lamp parat plutt less. However he made to the extent that the sound is so rich that does not diminish the perceived 15 meters ..
This silent quip of HP 25w 8ohm original CTS, but the mine is Cannabis Rex (Submitted a REFERENCE we do more).
Two effects: reverb and tremolo. N'tant fan of no effect (just plug and play ..) I do not comment on their quality. But they are salus by critics.
Add this one volume knob and another tonality (any left = severe; all right = acute dosing you).
It is simple but extremely effective, which I missed on the VT22 or VT40. However it is much less powerful than these two ERRF.

As said, plug and play and I'm very flat. I also play a Dynacord Twen (a sound more 'classic' (shuffled Fender, Vox, Marshall) but excellent.
I think this amp is IDAL in a register called classic rock. Cad: Stones, Who, Neil Young, Dylan, Kinks etc..
The clean sound is difficult to keep the average volume. Of course I bought it for his overdrive, but the clear sound of VT22 I miss sometimes.

The sound is 70's rock and well qu'tant a brilliant amp plutt my hp Eminence Cannabis Rex makes it softer. I play with a Les Paul standard (Burstbucker Pro) Fender telecaster japan (micro fender after a 70's tele in bridge, Lollar Imperial in neck) and a Gibson ES 355. Is to say, I who swears by the sound of Exile, Sticky Fingers or Get Yer Ya Ya to's Out, everything is just the need to turn the Tone button to change their live sound in the studio ..
The reverb and tremolo are great but I have no comparison as given net head that I do not operates.

The sound I was looking for, Stones etc, silent on the less accessible or VT22 VT40 I tried before. I do not know if the lights and played an important rle hp, or even my non comprhension all the knobs and pull of two large meant that I could not find the sound I looking for. But it is the IDAL. FYI this is the same as Ampeg GU Schma 12 (some minor changes reverb or tonal two buttons). Watch on Youtube the sound coming out of the GU 12, you will understand my blabla ..
650 euros for this amp it hurt to beginners (buy on eBay ..) but I'm too buff for not having walked in! Ds that I reu I took a slap ..
If you are looking for the true year of the Stones .. I wish you to find one (either 12 or GU J12R 'reverbojet') but do not lchez, they are ultra rare these days ..
See the source
Did you find this review helpful?yesno
Cookies help us improve performance, enhance user experience and deliver our services. By using our services, you agree to our use of cookies. Find out more.