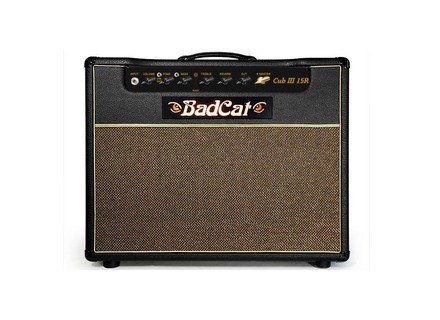 The third generation of Bad Cat CUB amps gives guitar players the ability to switch between a 12AX7 and an EF86 tube at the preamp stage via a control on the amp or the footswitch, which allows for altering the gain structure and sound character.

The EQ has also been modified from the previous versions, with the addition of an adjustable gain for highs and lows, but the standard Cub mode is still available.

The reverb circuit has also been revamped in order to offer a more plate-like effect.

Last, Bad Cat included the patent pending K Master system, which boosts the gain at the power-amp level only, without affecting the preamp. Thanks to this feature, you can play at high volume without saturating the preamp. Note that the power amp includes two EL84 valves.

The CUB III Series comprises two 15W and 30W combos as well as three 15W, 30W and 40W heads, all with Class A topology and a 5AR4 rectifier tube. The combos host proprietary custom Celestion speakers and you will also find on every model an effect loop as well as speaker outputs with switchable impedance (4, 8 and 16 Ohms). Bad Cat Amps offers various options for finish customization.