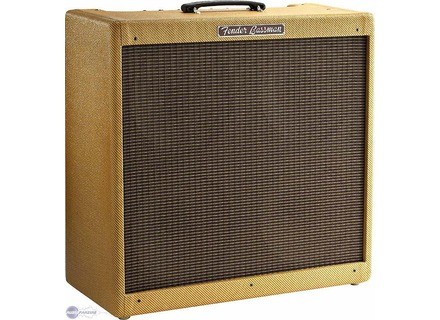 Buy this productView price information >
View other reviews for this product:
Although the Bassman series dates back to 1952, The 5F6 Bassman circuit, introduced by Leo Fender in 1959 in 4x10 combo format, is widely considered to be the beginning of guitar amplification as we know it. As its name suggests, it was originally designed with the bass player in mind, but it caught on with guitar players to the extent that it's scarcely even considered a bass amplifier. It was so popular that even Marshall copied the circuit into what became the very first Marshall amplifier, known as the JTM-45.

In keeping with the original, the '59 Bassman features 12AX7 preamp valves, a 5AR4 rectifier tube, and the true 5F6 circuit. There is no effects loop or built-in reverb.

The '59 Bassman sounds excellent right out of the box. It has controls for volume, Treble, Mid, Bass, and Presence. Four inputs give you normal and bright inputs at two different gain levels. This is where the infamous "jumpering" mod was born, by running a short patch cable from one input to another, to loop two gain stages together.

Unlike most Fenders that succeeded it, the Bassman uses a cathode-follower driven tonestack, which adds a certain compression to the preamp tone that is part of the Bassman charm. The Bassman is clean without being spanky, and smooth without being overdriven. The touch-sensitivity and dynamics are almost unparalleled.

With the stock speakers, its rather easy for the Bassman to get harsh, so keeping the Presence control at a moderate level is a good idea.

The Bassman adores pedals. A tubescreamer pushes the Bassman into a woody, organic roar that is neither forced nor aggressive, while a hard pick-hand attack evokes the natural compression the amp encounters from the slow tube rectifier.

There is plenty of volume on tap with the Bassman, and most will not need to crank the amp past 4 (it goes to 12. Take that, Nigel!) even in most outdoor venues.

Construction of the '59 Bassman LTD is rock-solid, and a worthy of respect in a world where tube amps are now done on automated assembly lines with machines.

All of the amp's guts are easily accessible, thanks to the rear cabinet panel over the chassis. This may or may not be a good thing, especially for those who are uneducated, as it makes poking around in a high-voltage circuit ridiculously easy.
Most guitar players who are familiar with tube amps know better, however.

The speakers are easily upgradable, and one will find a wealth of info online about different aftermarket speaker models that could enhance the Bassman's tone or help reproduce the nuances of the original. To that end, the defining difference between the '59 Bassman Reissue and the original '59 bassman are the speakers, transformers, and circuit construction, as the original used tag-board construction and the reissue uses the now-common PCB. But whatever "mojo" is held off from the reissue due to these differences is rather negligible. The '59 Bassman Reissue is a worthy and faithful reproduction that many, including myself, are and will be proud to own.