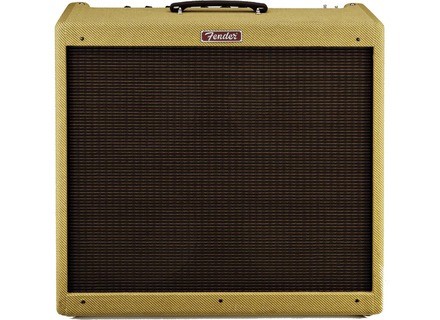 View other reviews for this product:
The Fender Blues Deville is a tube amplifier with a solid state recifier, driven by three 12ax7's in the preamp and two 6L6's in the poweramp. It gets 60 watts from the two 6L6's. It's equipped with four 10" special design eminence 30 watt speakers and runs at 4 or 8 ohms. It has two inputs which can be pretty nice. It's controls include: Presence, Reverb, Master Volume, Middle, Bass, Treble, Drive Select Switch, Drive Volume, Bright Switch. Has a chrome face plate and chicken head knobs. It also has an effects loop. Very classy looking amp.

It's very easy to dial in a good sound from this amp. It's got loads of clean headroom and a very nice gain channel for blues. It doesn't have a whole lot of gain, so you would need to boost the front of this amp to get heavier types of gain. But with a few pedals this amp is a beast. Everything is simple, no explanation needed.

I've used a few guitars through mine. Strat, tele, humbucker tele, Les Paul type guitars. All work well and respond as they should. The reverb isn't the greatest but it's certainly better than the built in reverb on many amps. I prefer pedal reverb though. I really like setting the EQ flat and using lots of pedals with this amplifier. It's fantastic for pedals and has loads of headroom so it's the perfect canvas for creating your tone through pedals.

I really like the headroom, look and pure loudness of this amp. There is nothing really bad I can say about it other than the drive channel. I am not a fan. I prefer just the clean side. Not to completely rule out the drive though, it has it's uses. It's loud, has great cleans, and it's Fender. It does everything it was made to well. I played a few different models of the Hot Rod Series before picking this one up. It was by far my favourite of the series. I would get another one later on in life if I decide to move this one.
Did you find this review helpful?yesno