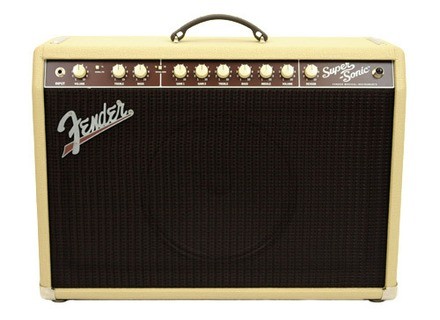 Buy this productView price information >
View other reviews for this product:
The Fender Super Sonic 22 is a recent addition to their line of Super Sonic amps. These amps are meant to take Fender cleans and pair them with a thick and viscous sounding overdrive channel. The Super Sonic 22 is a smaller combo (1x12 version) that comes in at a very gig friendly and easy to handle 22 watts of power (same as the ever popular Fender Deluxe Reverb reissue.

The amplifier is 22 true tube watts as stated, and is powered by dual 6V6 power tubes. It's got two channels (vintage and burn), separate EQ controls for each channel, an onboard reverb, effects loop, and a single Fender "Lightning Bolt" speaker built/designed by Eminence speakers. The vintage channel (IE: clean) has a switchable mode to go from "normal" mode to a "fat" mode, which takes the sound from the 60s blackface Fender chime (normal) to a much thicker tweed esque Fender growl with more gain and low end (fat). The gain channel is interesting in that it features two cascaded gain controls (gain 1 and gain 2) as opposed to a single master gain control. This allows you to set up more of an old school sort of tone much like the classic Marshall amps sometimes did when they were modified to accept a master volume control, so they'd have dual cascading gains and a master volume.

Getting a good tone out of this amplifier was very simple for sure. Most Fender amps are very intuitive and easy to set up and this is no exception. The clean channel is very basic, with just single volume and tone controls and the aforementioned normal/fat mode switch. The normal mode is definitely a much cleaner sound, and if you add in some reverb and use a single coil loaded guitar, it's very jangle-y and crisp, much like a nice Fender blackface or early silverface combo amplifier. The fat mode takes it up a few notches to that much thicker/grittier clean tone that was prominent in some of Fender's tweed amplifiers. This mode is great with a slightly overwound single coil, a P90 or a medium output humbucker for a compressed and gritty clean that is wonderful sounding for bluesier textures.

The drive channel is very thick and booming. It's not a modern sounding smoother gain channel, but rather a more classic sounding, almost fuzz like gain channel that works really well for sludgier sort of tones. The cascading gain controls are nice because you can get a blend of two different gain textures and mix them together for whichever sort of sound suits you. The best comparison I have for the drive channel is basically an older tweed Fender that has been turned up to obscenely hot levels and sounds like it may blow up... it is truly an on the edge sound.

I've tried this amp with numerous Fender, Gibson and Charvel guitars and each had their own great characteristics that worked very well with the amp. Each mode on the clean channel was very useable and sounded great despite having only two controls to work with. The overdrive channel is definitely geared towards a classic sound. It doesn't have the tightness for modern rock/metal tones I find, but there are other amps out there for that. I suspect that the 6V6 power tubes contribute to this, as I noticed the same sort of thing with the 6V6 loaded Orange Rockerverb 50 that I owned. The EQ controls work very well on the overdrive channel and provide a good round mix of all frequencies. The reverb, though it can be drippy at higher settings is very useable on both channels as well.

All in all I feel this is a great sounding amp by Fender. It blends vintage and modern voicings together in one package that is topped off with a great Fender reverb, an effects loop, and a very gig/player friendly 22 watt 1x12 package. It reacts well with many different types of guitars with many different pickups, and all of those tones sound good in all the right places. Definitely an awesome buy.
Did you find this review helpful?yesno