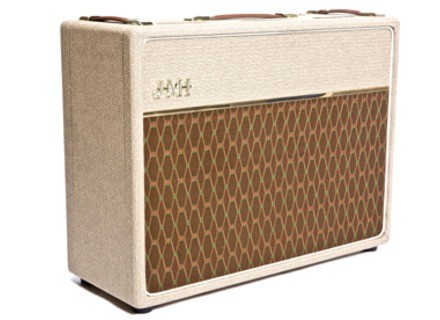 View other reviews for this product:
JMI amplification has seen a rebirth of the greatest sounding British amplifiers in the world. These amps were the initials on the back and the faceplate of the the original Vox amps from the early 60's. If you come across a Vox Ac30 with the acronym JMI on it then you no you have one the first and very best Vox amps built.

So fast forward to today and you see the company begin to build amps once again outside of the Vox name. These are prefect recreations of the originals and sound and look the part. These amps have such a phenomenal tone that it makes you cry to see the price thye are asking for these amps.

As soon as you plug into a JMi amp you will immediately know the difference in the today's version of the Vox Ac30. Compared to the Vox Ac30 they are putting out now is not even fair. This amp absolutely dominates that amp in ever way possible. First of the tone is superb and the build quality is unmatched. Plus these amps are made in the UK, unlike Vox today which is made in China.

Try plugging in a Gibson Les Paul or a Rickenbacker 360 and you'll here a sound that you have been seeking all your guitar career. This tone is flat out addicting. You can sit there and play this amp for hours on end. Hook up one of there treble boosters they off er and let the Queen/Brian May riffs fly.

Other than the price these amps are spectacular. At new these amps come in at around $3699. Youch that is a high price for a combo amp. These are basically boutique quality amps so in comparison to a Bogner or a Diezel then you are in a good place.

I would recommend this amp if you are searching for the best Vox tone period. If you like boutique amps then this amp is right up your alley.
Did you find this review helpful?yesno