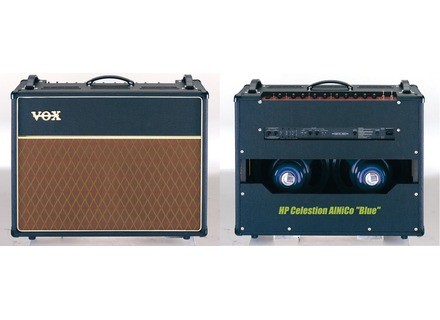 View other reviews for this product:
All Tube Amp.
30 watts
2 input jack (a standard type "brilliant" and a "top boost" that adds as much grain as you want!
Effects loop, tremolo (depth and mix control), reverb (control intensity and mix).
Foot swith to enable / disable the reverb and tremolo.
Setting Low / high for the normal channel and low / medium / high for the top boost.
A separate gain controls for both channels at ... interesting settings.

Simple operation, manual useless ... the sound is easily worked by trial and error the knobs ..
The sound is called "Vox typed" but I would say, "like all the amps" .. I find this amp versatile, I play ds 2 formations: a clear and focused sound rather lautre saturated rock ... everything passes ss worries.

For my group typed the clear standard input
For the other type saturated rock I return to top boost ... and terrible!
I love this lil grain given to the clean channel is super hot now.
Played with a Gibson Les Paul Standard ... it farts!
I think we can all ask is this amp.

I use it for 1 year 1 / 2, I never think to change it .. and then buy one to play in stereo (lol).
I like his presence, his power (yes, 30 watts ca real hard ... the head has never used more than half, yet it was a big stage!)
Nothing to do, of course with a transistor amp.
A bit expensive but my taste bcp warmer or a Hot Rod Marshall.
I recommend it to anyone who wants an amp that runs and who does not give up!
Bemol .. weight! .. .. It's heavy heavy!
See the source
Did you find this review helpful?yesno
Cookies help us improve performance, enhance user experience and deliver our services. By using our services, you agree to our use of cookies. Find out more.