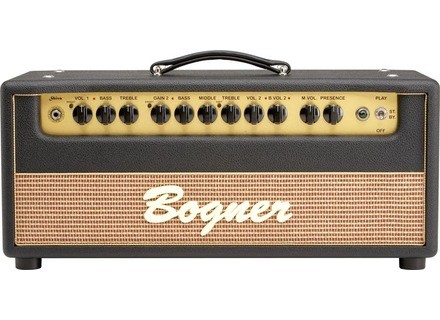 Buy this productView price information >
View other reviews for this product:
So it's the amplification en el 34 (two for 80 watts, but it's really strange 80 watts, I assure you), there is a 6L6 version, but I do not know.
The clean channel has a volume or gain, bass, treble, and that's all that's enough!
The channel has a saturated gain, bass, mid, treble and volume, both channels arrive in a master and a general presence. The lead channel has a boost that adds gain and body sound. Tube Reverb (hummm!) and effects loop that requires a few tweaks, it must make a cable with resitance at the end, leading to reduced signal level, failing to saturate the effect. Everything is very well explained on the manufacturer's website, including the values ​​of resistors to use.

Plug and play and pan in your geule! vaiement not, is the first time that I spend so little time to balance my sound! The worst by putting everything in the middle, it sounds already very well and if you take 5 minutes is refined tout.Les the tone controls are effective, but the amp has its indentitée its own, the interest is that the it does not get lost in weak settings (who digs too much mids on his amp, which?) The effects loop is one of the best I had, if we have taken care to tinker with the cable, note and for the return loop is through the "boost amp" is a kind of internal buffer, which dates back the signal that we fell in with the special cable.
The settings of reverb in the rear is a bit boring to Triffouille on stage between songs, but with practice, it happens.

Here we are, the sound, you know to give you an idea I had before this amp, a Rivera, a triamp h & k, a Marshall JCM 2000, a Carvin Legacy (which resembles very much this amp for that matter) I had the opportunity to play on a Mesa Boogie Roadking, a VHT etc ... Ben is just the best clean sound I've had, very dynamic (which is not necessarily easy to play for that matter). The lead channel can go from a crunch like tube screamer (but better) has boosted the old marshall (Inrush in the boost). I for one a little boost all with a mxr micro amp, just to have a little more sustain, but it's gluttony. Some will find that there is not enough gain or it's not modern enough, good as they want me until I pass a big truck in a mix of scene ...

This is the best amp I had in my life and yet I try others, I test, I compare, well I have not found better, anyway if I find better, I need it (yes I treat myself, but hey, it's my job anyway, so I right doctor eh?) I wait to test the custom audio OD100, but in the meantime: Bogner for ever!
See the source
Did you find this review helpful?yesno
Cookies help us improve performance, enhance user experience and deliver our services. By using our services, you agree to our use of cookies. Find out more.