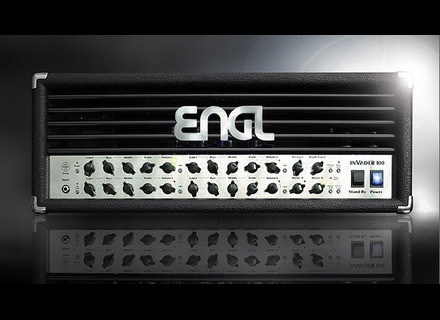 View other reviews for this product:
Engl is a company that excels as making those over compressed metal voicing amp for straight ahead metal tuning and drop tunings. Many metal guys have even signed on as endorsers of Engl amps. This amp will blown down doors and bust through walls. This is a three channel amp with a clean, crunch, and lead channel. Each channel is extremely usable and friendly to just about any music. However, this amp's voicing is tailored to a metal players amp. What that means is the voicing serves towards the metal style rather than a British style amp. This amp is a metal guitar players dream amp.

The basic layout of the Invader consists of an all tube driven head, that features 8 different gain stages in 4 separate channels that include four separate EQs.

Powered by 4 EL 34 Tubes the Invader delivers a total amount of 100 watts. The idea behind the Invader is that guitarists need most flexibility and control for any given playing situation. Easy to handle ñ just focusing on pure tube tone.

The Invader achieves that with a new concept: This amp does not feature the classic 4 channel head layout of a Clean- Crunch- Rhythm- Lead channel.
The Invader is different.

Named Channel 1, 2, 3, 4, these channels are able to produce different Overdrive / Gain structures ñ each one from Crunch to High Gain. Every Overdrive Voicing in the channels is different.

In conjunction with the Hi / Lo gain switch, which can be remote controlled and a separate EQ section for each channel, there will be no limits except the guitarist creativity.

The clean tone is awesome with just a touch of hair to get a great blues rock tone. The crunch channel is good classic rock type tones and basically any kind of 70's rock tones. This is a great channel for covers as well since it has a general crunch tone that works well with effects such as delays and choruses. It can even get pretty heavy in the crunch area for some newer metal tones. If you play a lot of covers or just play a more mainstream rock then this channel will be right up your ally. The next channel is the rhythm channel and this is a nice high gain crunch channel. This can cover a lot of ground including 80's hard rock and metal all the way up to today's more modern type tones. The finally channel is the lead channel which more voiced towards lead playing and sols. This channels has a nigher upper mid section so the toes cut through the mix a lot better.

You can find these amps new right at around $2849, which may a bit high for most people but this is more towards professional touring artists and musicians who know what they want. This is a great all around amps for a lot of styles of music. I would recommend this amp to any one who needs a good workhorse amp that gets a great all around tone for basically any kind of music.
Did you find this review helpful?yesno
Cookies help us improve performance, enhance user experience and deliver our services. By using our services, you agree to our use of cookies. Find out more.