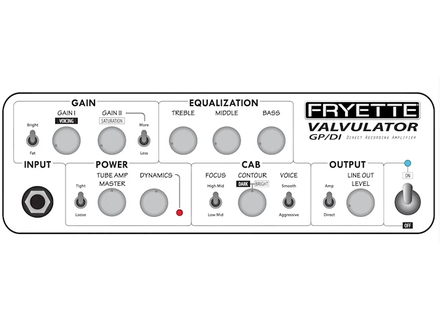 Fryette on Kickstarter for a new amp project

The Valvulator GP-DI is a compact tube amp head with only one channel, which offers everything a guitar player needs to play and record at home, in the studio or on stage, including a cabinet simulation and a DI. Fryette's first idea with this project is to offer a product that can be used at night to play and record silently.

The preamp is based on the Fryette's Deliverance Series, with some tweaks made to offer more sonic versatility. Its hosts three 12AX7 valves and you can choose between three or four gain stages.

The power stage features a single valve and a push-pull design that feeds a special reactive load, which allows for using this section with or without additional cabs and also offers the possibility to plug de GP-DI to another guitar power amp.

The Cab section controls and EQ placed post-power amp and allows for shaping the sound of the Amp/Direct output only. Fryette adds that this filter is dynamic and reacts to the player's picking and attack.

The front of the amp features a gain section with Voicing and Saturation knobs and two Bright/Fat and More/Less switches, a 3-band EQ, the Power section with master, dynamics controls and Tight/Loose switch, the Cab section with a Contour knob and two Focus switches for the high/low-mids and Voice (smooth/aggressive) and the Output section with level control.

On the rear, the Valvulator GP-DI offers two Direct and discrete outputs on XLR/Jack combos, the main responding to the front level knob the Amp/Direct switch, the second being a line level direct out. A cab output on jack with 8/16 Ohms switch is also present, as well as the output to the power amp and Auxiliary In and Thru.

If funded, the Valvulator GP-DI street price will be $599, and the release is planned at the beginning of 2014. The first 50 crowdfunders get a special price of $399, then the price will raise to $499. You can also get the first prototypes, which are sold $1500 and above.