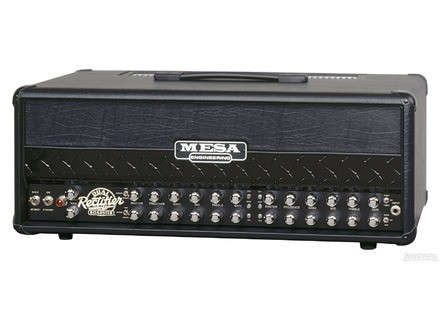 View other reviews for this product:
The Mesa Boogie Rectifier Roadster is one of the company's flagship Rectifier amplifiers. It features four channels with a whole myriad of different modes available and many different tones within. It's a 100w tube head that is selectable between 6L6 and EL34 tubes. Since it's such a complex amp, here's Mesa's full list of specs:

Dialing this amp in is a fair bit harder to do than certain Mesa amps for sure, simply because it is a 4 channel head that contains many different switching options and sounds for the player who is never satisfied and is always searching for a new tone that will work. It does everything from spanky, jangly cleans to bluesier mid gain tones to the highest order of metal fury, so it can take time to fully get dialed in to your taste. Each channel is laid out with gain, bass, middle, treble, presence, and master volume controls, and in true Rectifier fashion, it takes a bit of time to figure out how the controls react to one another. That being said, when it's all dialed in it sounds excellent.

I've tried the Dual Rectifier Roadster with many different Gibson and PRS guitars. The clean sounds remind me of a slightly more hi-fi sounding Fender amplifier, though it doesn't quite have the typical warmth and forgiveness that I prefer in my clean sounds. The crunch tones are surprisingly good for a Rectifier, and at their best they remind me of a slightly fuller 6L6 loaded Marshall type tone. Channel three is where the fun starts to begin, and that's where the hard rock and classic metal tones begin to appear. This channel has a fair bit of gain, but still has enough of an open quality to work for 80s rock/metal stuff. Channel four is where the modern and super compressed high gain tones live, and this is the channel where you grab your dropped B guitar and just let loose with a barrage of chugalug. Despite playing at such high gain levels, this amp never lost definition or "mushed out," but rather it remained clear and defined at all times.

One thing to note... this amp loves volume. It's not for bedroom players unless you play in a hockey arena sized bedroom. This amp is built for the stage and to be cranked up. At lower levels it's generally too fizzy and weak for my liking, but as soon as you crack the master volume... look out.

All in all I feel that the Mesa Dual Rectifier Roadster is a great sounding, versatile amp in the Rectifier series. I'm more of a Mesa Mark series guy, but I found myself loving the tones of this amp overall. Like I stated prior, it does need volume in my opinion to sound its best, but when it's given that it's a firebreather. These amps come in at about $2,000 new, which isn't bad. You can find them for about $1,300-$1,400 used if you look which is a stellar deal for this versatile, metal shredder's dream.
Did you find this review helpful?yesno
Cookies help us improve performance, enhance user experience and deliver our services. By using our services, you agree to our use of cookies. Find out more.