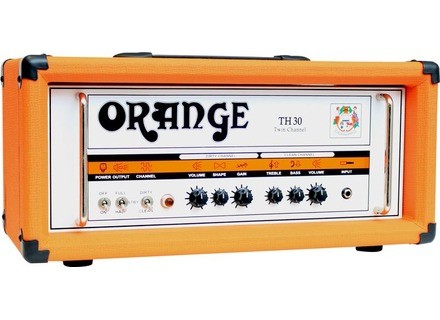 Buy this productView price information >
View other reviews for this product:
The effects loop on the Orange Thunder 30 is very transparent, which is nice. The amp seems a little more susceptible to hum from a dirty power source than other amps, so you may want to get a power conditioner. Otherwise, it's pretty quiet.

The clean channel starts to break up around 10 o'clock, depending on your guitar, which means that you can only go that loud for totally clean sounds. A bit of a bummer, but not a huge deal. As I said, I wish it had a presence control--it's not a bright amp and the treble control doesn't seem to boost much (though it can cut a lot if you need it to). Might also have preferred an amp with separate mid and bass controls, but that would have cost a good deal more. You can always add an EQ pedal if you want more control or brightness. The amp is very punchy and just overall such high quality that I would much rather put an EQ pedal on it than have bought a Mesa that comes with all those knobs. Generally, though, two tone controls is enough for me.

The dirty channel packs all the tone you need into one knob. It's pretty incredible. Probably not the most flexible amp, but you can get all the gain you'd ever need and it can be either scooped or relatively flat or all mids, so there isn't much need for another knob, in my opinion. I also like dialing back the volume on the guitar a bit while on the dirty channel--kind of a gritty, lo-fi sound that I really dig.

Overall, it's a solid amp that sounds great. Not the most flexible, but if you're like me, the reason you like an amp like this is because it has so few knobs. The less you have to fuss with, the less you have to worry about. This amp is a keeper.
Did you find this review helpful?yesno
Cookies help us improve performance, enhance user experience and deliver our services. By using our services, you agree to our use of cookies. Find out more.