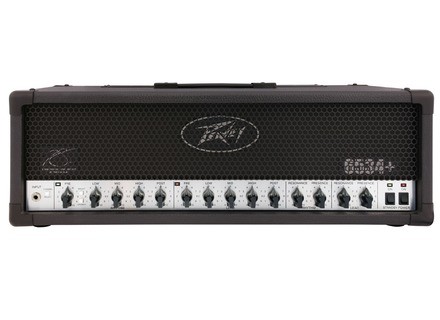 View other reviews for this product:
This is a similar amp to the 6505+, but with a tailor British voicing and gain structures well as El34 powers tubes. They simply didn't just put El34 power tubes in it and called it a British voiced amp. They went to work altering the amps circuit to be more of the British flavor.

The amp can sound amazing with the right speaker cabinet. I suggest not getting a Peavey cab since they are just garbage and I'm a Peavey fan. Get a nice Marshall cabinet or a decent Mesa Boogie cab and see how this amp will open up with good Greenbacks or Celestion v30's. They claim these amps are voicing with these cabs and that maybe true but I feel that this amp can come to life even more with the proper cabi adn speaker combo.

The tone from this amp is phenomenal. I think the Peavey tone lives on the ultra high gain mode whether it is a 6505, 5150, Rock master, or this new amp 6534+. The ultra high gain modes in most of not all Peavey amps sounds the best to my ears. I have ever been a fan of their low gain amps such as the classic series but there high gainers are out of this world good.

This amp sounds a little like a Marshall in its character of voicing but is has its own thing going. This amp definitely has its own feet to stand on. I like this amp like all the Peaveys with a Gibson Les Pauls or another humbucker style pickup guitar. I think the humbucker sounds the best through Peavey's type of distortion. It has a great resonance feature that controls the bottom end of the amp a bit which is a nice addition.

I would recommend this amp to anyone who loves a good solid hard rock and metal tone and prefers a more British leaning voicing and gain structure over the more American style of the 6505+
Did you find this review helpful?yesno
Cookies help us improve performance, enhance user experience and deliver our services. By using our services, you agree to our use of cookies. Find out more.