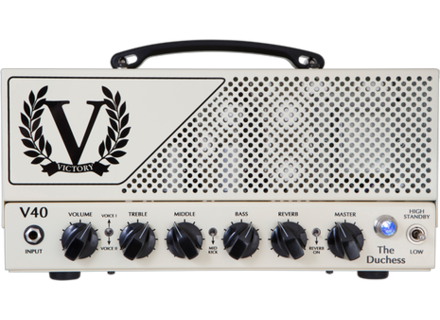 Victory V40 The Duchess and The Viscount amps

The Duchess and the Viscount are completing Victory’s noble genealogy, between The Earl and The Duke.

Both amps are identical: they feature a single channel with two switchable voices: the first offers a mid-60s US-type of tone, the second is a bit more powerful for a 50s style sound. And if you push the gain, you’ll engage the Mid-Kick function for a 60s British sound, so you can cover a large era of the blues and rock.

The V40 The Duchess construction employs metal with a rubber handle and the head ships with a gig bag. The V40 The Discount combo is made of pine with an open back.