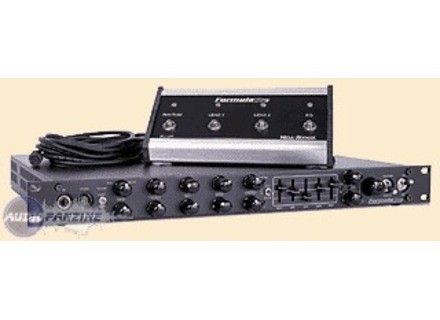 Value For Money : Excellent
View other reviews for this product:
Tube preamp with 5 12AX7 preamp tubes
1 guitar input IN
A control switch for output record
A clean channel
Channel 1 crunch
A channel distortion
A boost on the clean channel
2 classic equalizers separate channel for clean and crunch channel.
5 band equalizer 1
Two separate output volume, including 1 for the channel distortion
A switch on the front for selected equalizer either permanently or with foot switch
Volume 1 General
stereo output.
send input to output volume effects,
record output for recording on console mix.
no entry in the back cover.
A foot switch comes with the formula to control the clean channel, the crunch, the distortion and equalizer.
wholesale voila.
My 7 in 10 for the output record that are unusable,
inpunt and entry that is missing on the back cover if you want to enter the unit send or use a rack ISSUER.

The configuration of the machine could not be simpler, it settles out and the pots you play, in theory voila. But in practice it is quite another.
In fact everything depends on how we will use it, the traditional equalizers work well, but remember that like any preamp it to its own caractère.d &#39;or choice that you wear to buy it or not.
The clean channel is wonderful, the sound goes from a twin reverb black face.
the crunch distortion acts as a good neutral raditionally very nice but more inclined to rock and blues.
the channel distortion is more accentuated because it takes the clean channel equalizer of a job or 5-band equalizer.
5-band equalizer in my opinion the most difficult in history. because it is very sensitive and requires that they lent him much longer, so any time you want to use it because they don &#39; is not a requirement.
But beware the formula needs to be used with a tube power amp and not much advice on combos unless it is equipped with an input line, not to mix the two Equalisers.

The clean is very easy to obtain and very effective, even when there is a gap, the boost, because it is not controllable via the pedals of the formula.
Therefore be allowed to constantly be cutting it, but live it is of almost anything bad because the fans of Stevie Ray vaugan would be delighted.
For crunch and distortion there is a choice to make either one is satisfied with the two and that&#39;s good, or we use the equalizer to meet them either permanently or on one of the two effects but I think that &#39;do not go with the idea of ​​boosting the two effects with the equalizer if it&#39;s the disaster began, ca drool too serious and so on, (but his fans to ZZ TOP however, will be filled) they sell to boost asser pedals in order to do so.
equalizer is the most difficult because it is very sensitive and very effective, because it respects closely the frequencies it needs to manage (a reference to mesa), which is not always the case on devices concurents .
One way to start the adjustment without too much break the head, is to start with an adjustable V and adjust the sound starting from the middle of the cursor.
But be careful not find the formula anyway its place in blues, rock, variety in the broad sense.
Personally, I use the clean and 2distos the equalizer as well fix that goes everywhere.
I also use a boost pedal on the crunch channel (1) to dig the grain.
I use a Rocktron Prophesy series starting from the IN of a formula for the formula ab box with the effects of prophesy and a volume pedal part, and a MIDI pedal to prophesy.
I use the clean and the formula of the formula distos plan for rock and heavy distos of prophesy.
My 8 of 10 for the boost it because that is what is expected as this machine and that price is very unfortunate.

I use it for some time and unlike inflammatory jai that could read about it, I am very satisfied.
I think the problem is that the hen we see the brand mesa boogie, and seen the trend, it confuses the rock and metal.
As for the metal there is the correct number? because the formula is the descendant of the studio preamp so, clean, blues, rock.
Do not forget that mesa boogie mark is primarily a concept, without which good number of brands would not could start their search, and at the base of the fender is nothing more to boost or clean much appreciated.
What I like the formula as in the quad preamp or preamp studio is its organic side that restores life to the speakers with either of the eminence of the V30 GT1275 (mixed careful!), Or the classic lead through the electro voice, this preamp happening everywhere. (almost)
But still, the choice of speakers is essential.
If you use the formula in a closed cabinet you will not even approach the mesa boogie in a box open or 3 / 4 fermé.Dans eminences than in V30.
the main and try it with the correct starting configuration to be set and take your time.
Otherwise e may be very disappointed, as with any other device of any brand is true that the price am not a camera for every budget, and if it is still necessary to buy a boost pedal as well! ! But that&#39;s a personal choice, but secondhand can still get away with price, and anyway, as the proverb say, the quality and the price remains flies.
7 of my 10 will the price for this award because of the NTRY IN and the boost would could be placed at the rear and crank the boost.
See the source
Did you find this review helpful?yesno
Cookies help us improve performance, enhance user experience and deliver our services. By using our services, you agree to our use of cookies. Find out more.